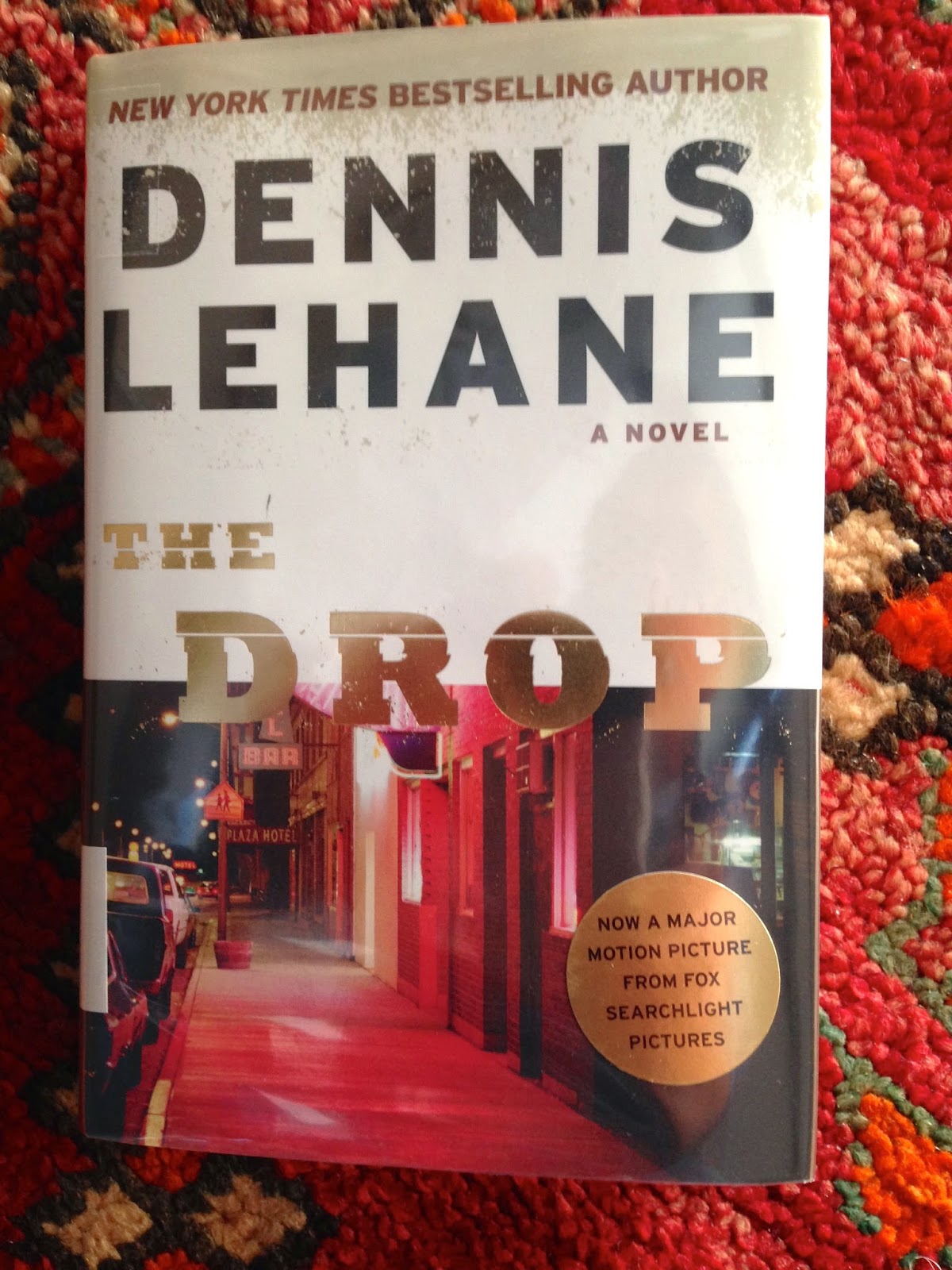 Just finished Dennis Lehane’s The Drop.  Little wonder it’s now a major motion picture.  Make sure you have a cold six-pack before you dive into the first page.  This one could interfere with trips to the frig and bathroom breaks.  And if your wife thinks you not paying attention now....

Bob, a bartender in the soft belly of the city, lives in a vicious world.  Violence is expected.  Deceit is the coin of the realm, and even your best friends can only be trusted while you stare them in the face.  Love?  Oh, yeah, there’s that, if that’s what it is.  If it’s not really love, then what the hell, sex is good enough.

In this city, it’s better to live an empty life, as quietly as possible.  Even then, you’re going to have to spend some time as a guest of the state.  Bob and most of his friends have been there, done that.  Of course, nobody’s guilty.  It wasn’t their fault.  Screw the evidence.

The police?  Hey, they’ve got their own problems, at home, at work, and on the soiled streets.

Law is at best undervalued, and at worse non-existent.  If you want something, take it, as long as you’ve got balls enough, and if you don’t have the balls, just shut up and pour the whiskey and try to stay in the shadows.

The biggest rule of law comes from the Chechen Mafia.  Sure, swift, brutal.  Not much evidence required. No court dates.  No appeals.

Suddenly a dog comes into your life.  A dog that needs rescuing. And a girl with her own deep scars.  And the twisted man who owns the rescued dog wants him back.  And, Bob, don’t forget you’re a nobody, a bartender.  Not making waves is the best way to keep breathing.

Lehane’s short novel is a heart stopper.  The characters couldn’t be more vivid if they swaggered through you living room.  Although, you wouldn’t want them to.  They should stay where they were born and where they grew up, in the squalor, on the wrong side of the filthy tracks.

The plot?  Rapid. Demonic.  Desperate. There’s no way out of this river of human excretion.  Just keep swimming, look around, and hold your head higher than the swiftly moving current.  Feel your heart racing?  Your pulse starting to feel like a tom-tom?  Get used to it.  The more pages you turn, the faster it gets.

Faith helps, especially when its core is faith in yourself.  Faith in God?  Yeah, even if that God is diminished by time and human frailty.

In slightly more than two hundred pages, this book will grab you by the throat, and toss you into a greedy world where only the darkly powerful, or the very lucky survive.  And, sometimes you just can’t count on the luck.  Or love.  Or faith.  At least not from the humans.
Posted by foxone12 at 12:36 PM No comments:

Treat Yourself to a Moroccan Feast! 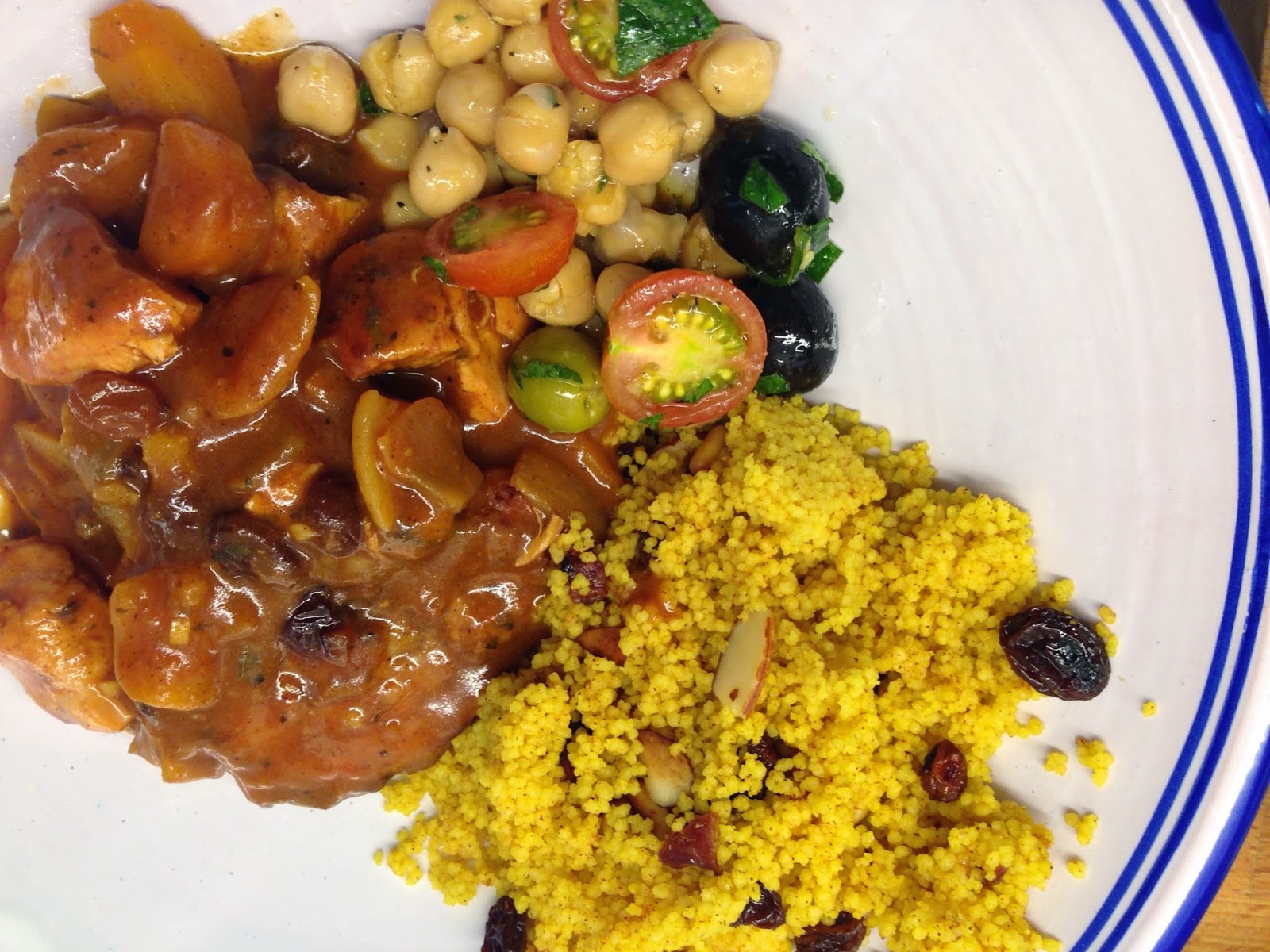 Here’s a secret.  Want to be an instant expert on damn near anything?  Charge down to the Children’s section of your local library.  Pick any topic and grab a kids’ book. Presto!  See, people who write history, geography, and dozens of other subjects have no time for B.S. when they write for kids.  The ideas are simple and the language matches.  Matter of fact, universities should give it a try.

With a kid’s book, you can know all you need to know about Abraham Lincoln, Castles, or in my case exotic recipes.  To be more specific, Moroccan recipes.

What’s more, when you cut the extraneous, the info’s a lot more interesting and useful. 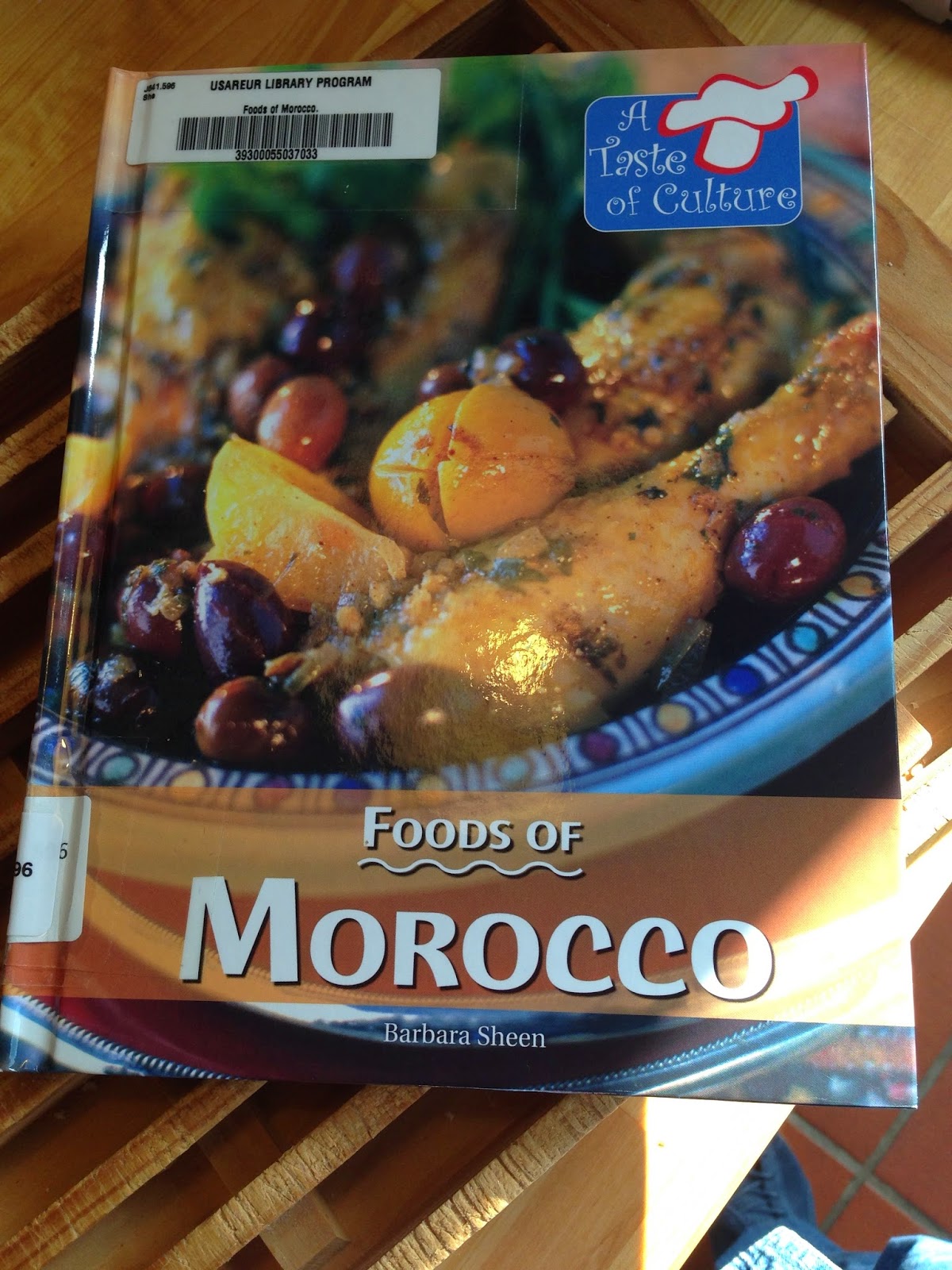 Even the title is simple:  Foods of Morocco, by Barbara Sheen.  Think you’re going to have to wade through fifty ways to raise chickens and the history and development of salad?   Spices known only to botanists? French lard?   Not a chance.  In a kid’s book, chicken is freaking chicken and cinnamon comes from the spice aisle in your local market, not on special order from Sri Lanka.

With Foods of Morocco, I not only found out about Morocco, Muslim customs, and the derivation of Moroccan foods, but got enough easy recipes to whip up a splendid meal, with instructions that will allow a small child, or even your wife to help you.

Of course, I fiddled a bit with the recipes.  After all, a recipe is only a mild suggestion, a timid finger pointed somewhat in the right direction. To get to the truth of the matter and really tantalize your taste buds, you have to dig deeper into your culinary bag.  A glass of wine is good for thinking.  Whiskey is better.

Along the way, you’ll get somewhat disparaging, open ended questions that challenge your manhood, integrity, and normally amicable personality. The questions won’t come from the small child.  Ignore the naysayer and stride forcefully into the spotlight of excellence.

After you’ve fought the worst of the objections, you’ll find that best of all, this main can be prepared in the oven or slow cooker, so just slap it in a slow oven and eat it when you get home.  Salad you can make the night before. The couscous only takes minutes, so that can wait.

Quiet down!  Let’s start with the Olive and Chickpea Salad

Put the olive oil in a bowl.  Add everything else and mix.  Serve it fresh, or put it in the frig until you’re ready to serve.

·      *mint grows like a weed and sends underground shoots all over.  Plant some in a sunny spot with room to spread.  Use it for salads, stews, or delicious teas.  Can’t have enough mint.  Also, there are lots of varieties.  I lean toward spearmint.
·      Mint tea:  pack a teapot with a big fistful of mint, stems and all.  Pour on boiling water, and add sugar to taste. 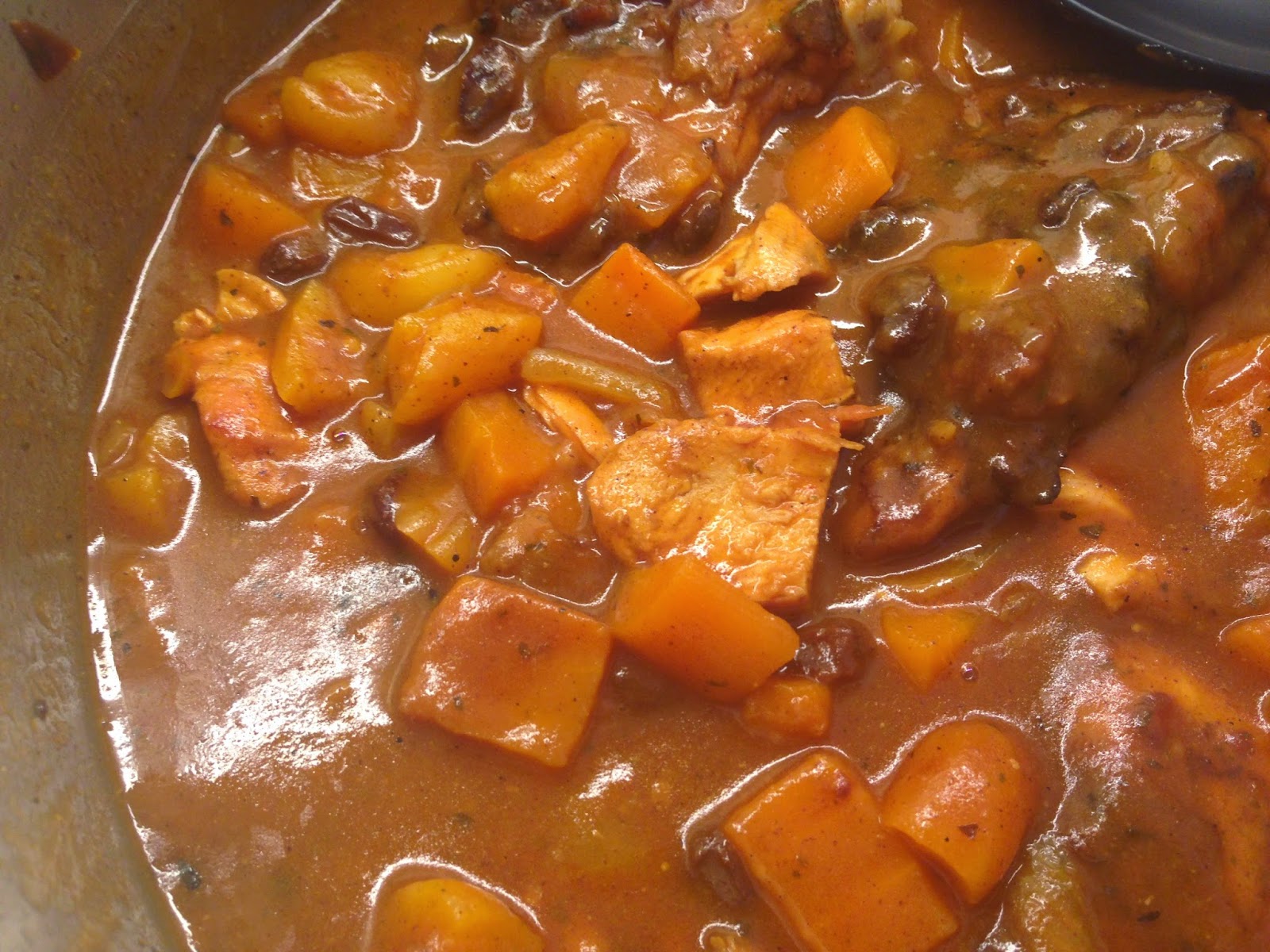 Did you know?  Tagine means both the pointed top cooking utensil and the stew itself?

Grill the chicken, then cut it into 1 inch chunks.  My preference is chicken thighs, but breasts will do.  Won’t they always?

Put the chicken, onion, and fruit in a Dutch oven (any large pot with a lid will do).  Mix everything else together in a bowl, except the butter/flour and the sweet potato. Pour the mixture over the chicken/onion.

Put the pot on the stove and bring everything to a boil.  Stir in the flour/butter mixture.

Place the top on the pot and slide it into the oven.  Leave it there for two hours.
Add the sweet potato cubes and cook for another hour.

I don’t have a slow cooker, but if you want to use yours, I suggest a total cooking time of 6-8 hours on low, or 4 hours on high.

Bring the broth, turmeric and butter to a boil.  Add the cup of couscous, cover and remove from the heat.  In five minutes it will be ready.  Stir the couscous and mix in the almond slivers and raisins, if desired. 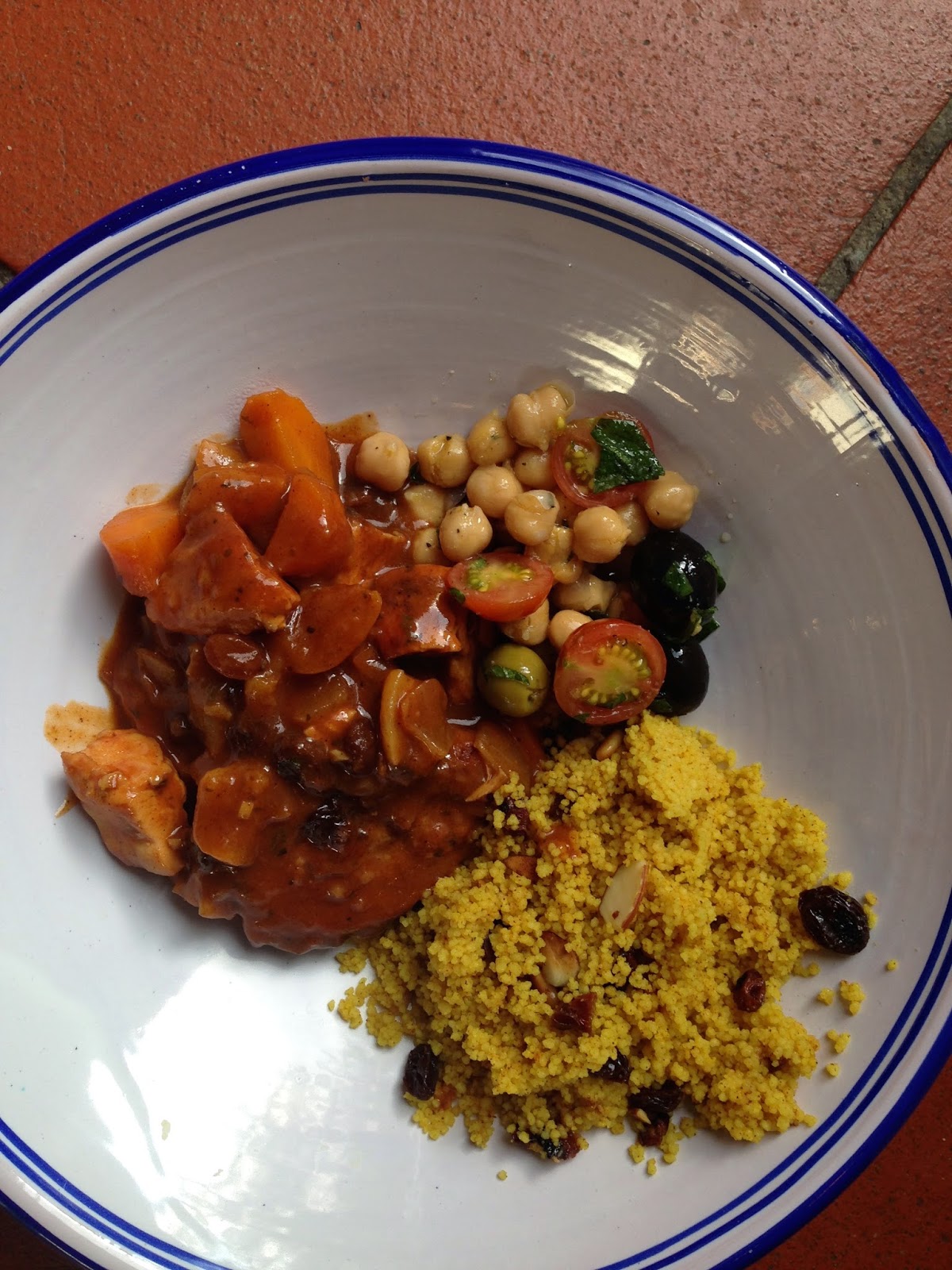 Another Tidbit to clutter your brain: when Abraham Lincoln lived in Indiana, he went to a ‘blab school.’  Students said all their lessons out loud and the teacher’s job was to pick out mistakes in the midst of all the noise.

From Who Was Abraham Lincoln, by Janet Pascal

Wonder how the teacher would have handled simultaneous texting?

Today is Tag der Deutschen Einheit, The Day of German Unity.  Happened 24 years ago.  This nation and life-changing event is known by many names, reunification, unification, the change, and the peaceful revolution.  No, that’s not the day the Berlin Wall came down.  That was 9 November 1989.  But, the wall coming down really was the beginning of the end for East Germany. The rest was details.

Nothing in history happens spur of the moment.  There’s always a lead up.  Here’s a short time line of the days and weeks before unification, all of which are significant in themselves.

Tag der Deutschen Einheit is a national holiday, so you may suppose this was the first unity, or unification.  Not so. There was another in the Federal Republic of Germany.  On the first of January 1957, Saarland (on the French border) returned to German control.  From 1947 through 1956, it had been a protectorate, administered by France.  Separation of the Saar area had happened before.  France and Britain administered the area from 1920 to 1935.

And of course, Germany itself only became a nation in 1871, under the leadership of Bismarck.  I’m fond of telling my German friends that the United States is about a hundred years older than their country.  They scoff and buy another round, but this time they don’t pay for mine.

Deutschland really is a pie that’s been sliced and re-sliced, only to be rejoined.  The sad fact is, everyday, fewer and fewer would remember without a major reminder. People who are 24 years old today, were just coming into this world on 3 October 1990.

Of course the same is true with our own history, even the very recent.  Thirteen years ago, when Islamic terrorists created the horror of 9/11, today’s eighth graders were born.  In another decade, our young doctors, lawyers, and politicians won’t have a first hand memory of those events.  A few years ago, I went to a Pearl Harbor event at my father’s nursing home, compliments of a local U.S. Naval unit.  The sailors knew very well, but I doubt the nursing home staff had a clue.  Just a bunch of old guys gathered for punch and cake.

So many events in our own history are long forgotten, even those which were current events for our fathers and grandfathers.  The frequently quoted saying is as true now as ever:

“Those who cannot remember the past are condemned to repeat it." (George Santayana)

I've got news for Mr. Santayana: we're doomed to repeat the past no matter what. That's what it is to be alive.”
― Kurt Vonnegut

Think of Memorial Day.  Ask your kids what it means.  How about Veterans Day and Labor Day?  Forget the kids.  Ask your spouse.

The Germans have many more holidays than we do, many of them Christian, but still celebrated nationally.  Tag der Deutschen Einheit is one of the biggest.  But, I fear Kurt Vonnegut is right.  Time erases the past.
Posted by foxone12 at 4:49 AM No comments: