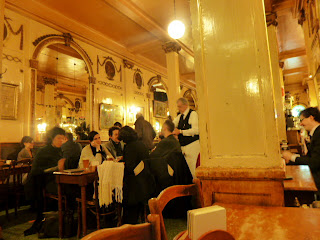 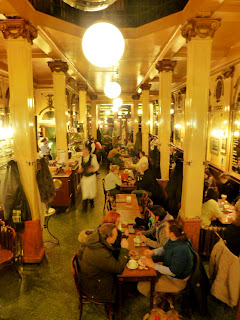 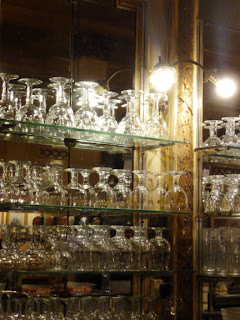 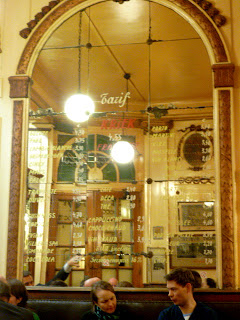 In the heart of Brussels, you take a turn down a small street.  Not an alley, but not a thoroughfare either.  Light lingers on the sidewalk in front of a tucked away bistro that looks like something off a Woody Allen set.  La Mort Subite glares in comfortable neon and hangs like a banner over a 1920s building, bursting with people in animated conversation.  “Hey, waiter!  Another beer and some cheese and sausage!”  But, it’s said in French so it sounds like a seduction.  Maybe it is.  The beer is that good.

You walk inside and the nearly century old décor amazes.  You’ve crossed the time barrier and stepped back into Brussels’ glory days, when beer flowed from the fountains of a hundred breweries, when men dressed in stiff collared shirts and women traipsed about in ankle length furs.

Sadly, that’s no longer true, but we live in hope and dreams.  Still, the old wooden tables are there, the high ceilings, tall, square columns, and soft, cream colored overheads that deck the room in graceful light.  The beer still flows and it’s still brewed by the folks who sell it.

These are the good old days, after the First World War and before the Great Depression.  1928.  You can feel it in the air.  Enjoy the evening.  This is the place to forget cares, savor the flavors, and pretend you know what you’re talking about.  Hemmingway and F. Scott Fitzgerald would have loved it.

La Mort Subite really began about 1910, in an establishment called La Cour Royale.  As the story goes, tellers from the National Bank of Belgium came to drink and play a game called 421.  Before they left to ease back into the monotony of work, they’d rush through just one more game, la mort subite, or sudden death.  The name took to the streets.

When in 1928, the owner and proprietor, Mr. Theophile Vossen moved his business to the current location, he changed the name to match what everyone already called it, La Mort Subite.  Mr. Vossen’s progeny have carried on and today the fourth generation continues to serve those Gueuze beers that have slaked the thirst of locals and visitors for almost a hundred years.

What is a Gueuze beer?  Catch my next blog and I’ll take you to the last old style brewery in Brussels.  Until then, here are a few teasers:  Top fermentation, from naturally occurring yeast.  Years of aging that blur the line between wine and beer.

Hey, that’s enough.  If you get to Brussels, go in and sip a cool one.  As well as beer and atmosphere, there’s got to be a novel brewing in a one-of-a-kind bistro like La Mort Subite. 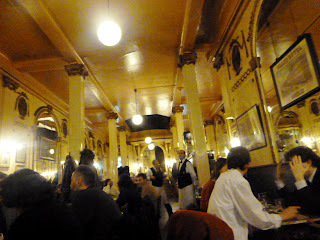 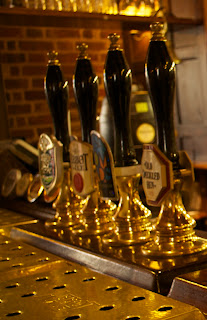 Hello.  Archibald Bumslick here in London.  That’s England, not Ontario, Arkansas, Nigeria, nor dozens of other Londons that don’t matter a nitty twit.

Have a gander in the British Dental Association’s Dental Museum.  Knew you’d want to know. Admire the big molars on the lass next to you at the bar.  Make some off color remarks about her overbite.

Time to get serious.  Here’s list of pubs that’ll rust your pipes.  Trust me.  Take the hint.  Keep the snapping fangs of trouble at bay.  Preserve the flex in your knees.  Write these down.  Mark your map.

1.    Ye Ole Red Rosy - Might be interesting once you get inside the bloody place.   Long line outside.  Then, it’s a tight squeeze. Once you’re in, you feel flushed.  This isn’t the worst pub on the list, but it’s right up in there.

2.    Squeeze the Dog and Run – They call him man’s best friend, but even your worst enemy won’t crap on your living room rug and look you in the eye.  The drinks have something floating on top.

3.    My Brittle Bone – Snappy little place.  All knees and elbows at the bar.  Lots of bars.  There’s the Thigh Bar connected to the Hip Bar, etc.

5.    Happy Jihadist - A thinly veiled disguise.  Everything they serve is non-alcoholic.  The “Seventy-two Virgins” on toast leads to intestinal discomfort, followed by an explosive race for the loo.

7.    Ye Salmon-Ella – Right away you smell something fishy.  The sign over the bar is a tip off.  “What’s eaten here stays here.”  That’s mostly true, except for the runny parts that leak under the door.

8.    Frog Under Foot - Nauseating décor, all red and green.  The beer is flat.  Avoid the “Where-the-Rubber-Hits-the-Toad” stew.

9.    Duke of Dooky –located on one of the canals, right down the city’s spine and pretty much flush with the walls.  Odd smell to the place.  Stay away from the sausage rolls.

10.  The Severed Arms – Difficult to find.  Not on one of the main arteries.  Can’t put my finger on what’s missing….oh, yeah, almost forgot.

11.  Hair O The Cat Grill  – Not for the squeamish.   The barkeep is Italian, constantly braying, “Don’ta yu try to cheetah me!” I’m not lion.  The litter box lunch is a litter bit off-putting.  Strain the soup.

12.  Ye Perverted Donkey – Among we Brits it’s known as the Kiss My Mule.  A very stable place.  Been here for ages.  Don’t order the ‘Clod in the Clover’ draft from Recycled Hay Brewery.

Note:  This is a work of fiction.  Any resemblance to your favorite pub is strictly in your inebriated mind and in the mind of the drunken wench hanging on your arm. 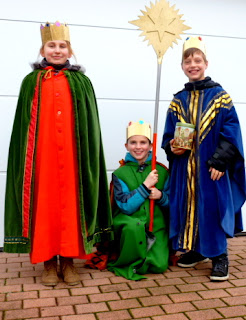 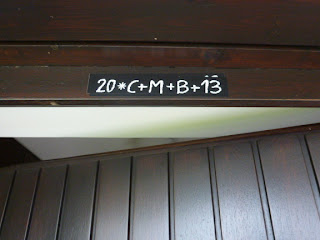 There’s a knock on the door.  I open it and three children in costume begin to sing.  Known as Sternsingers (Star Singers), the kids, ages around 8-10, are honoring Three Kings Day, or as they call it in Germany, Dreikönigstag.  They wear colorful costumes and at least one carries a wooden stick with a star on one end.

Ok, I realize (and so do they) that The Good Book doesn’t specify there were three kings and although we usually think of kings as males, the Bible doesn’t really say that either.  Translations being what they are and knowing that the event happened over two thousand plus years ago, three and kings may have been approximations, who cares?

I like the tradition.  This year the Sternsingers came around on a Saturday and although it was 5 January and Three Kings Day is traditionally 6 January, who’s going to quibble?  The kids always have an adult chaperone who is quick to point out in any language you choose that the singers are not just there to sing you a carol, but to also bless your house and collect some money for less fortunate children around the world.

In a Roman Catholic tradition, they either chalk or put a sticker over your door that reads:  20+C+M+C+13.  I know you’re wondering and so was I.  Here’s the scoop.

The letters have two meanings. They’re the initials of the Three Magi: Caspar, Melchior and Balthasar, and they also abbreviate the Latin words “Christus Mansionem Benedicat”, “May Christ bless the house”. The year is divided before and after the letters.  The crosses (+) represent the protection of the Christ.

Not being a Roman Catholic, I didn’t know any of that.  But, life being as uncertain as it is, hey, anybody who wants to have a go at keeping my family and our home safe, I say, go for it.  Besides, what curmudgeon can resist three cute kids, singing beautifully just for you and collecting money for a good cause?  Not I.  Clink, clink went the shekels into the tin box, offered by a small, outstretched hand.   Then three kings (or in my case, two kings and a queen) delivered a solemn blessing in unison.

A little cheerful music, a quick blessing, and I’m good for another year.
Posted by foxone12 at 6:18 PM No comments: