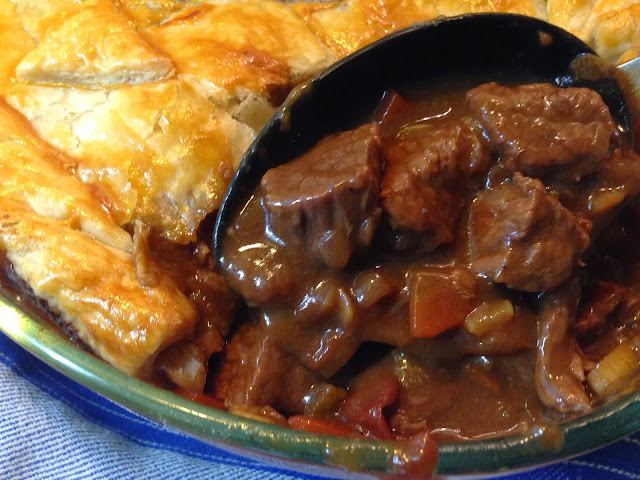 And you thought Guinness, the heavenly gift from Ireland, was just for drinking, shampooing, brushing your teeth, and gargling.  As the Irish say, fook no.  You gotta keep some spare cans in your kitchen.  Tuck a couple of cans away where your thirsty wife won’t find ‘em. I’m about to give you just one reason why.  Guinness Beef Pie.

But, first I have to let you in on a secret.  Yes, I know I’ve blogged about going to the Guinness Brewery at St. James Gate, Dublin, and told you most of what you need to know about this Irish legend.

But, in my haste, I left out the part about crowd-pleasing cooking.   I’m going to rectify that omission, right after I give you a hint about using Guinness for either cooking, or drinking:  buy Guinness in a can.  It’s marked ‘draft’ and that’s not just an expression.  Normally, if I can’t get real draft, I go for a bottle, but in the case of Guinness, I make a rare exception.  The Guinness cans contain an agitation ball and when the can is opened and poured, the brew is aerated automatically, giving you very, very close to a true draft taste.  Ok, now that you’re enlightened, let’s move on to the long anticipated, lip smacking recipe. 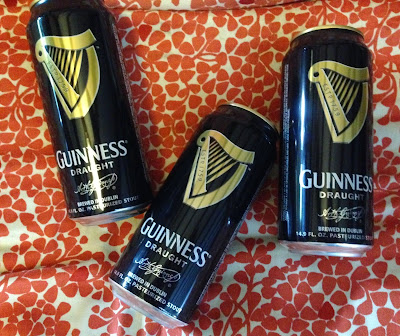 4 ribs celery, diced  (I use the leaves as well) 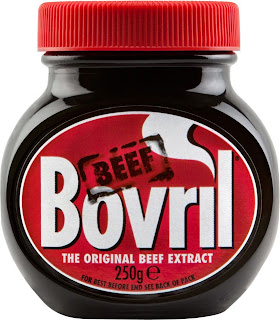 salt and pepper to taste

Salt and pepper the beef.  Put the oil in a large pot, or Dutch oven and turn heat to medium high.  When the oil is hot, add the beef chunks and stir to barely brown.  Don’t worry that the meat is only partially cooked.  It’ll get a lengthy cooking very soon.  Don’t pour off the extra liquid from the cooked meat.

When the beef is barely browned, add all the vegetables/garlic and stir.  Add the can of Guinness and the undiluted beef broth.  Add the cinnamon.  When the mixture comes to a boil, lower the heat to a simmer. Partially cover and let the mixture cook until the meat is tender, about an hour.

When the meat is tender, add the flour/butter mixture and stir.  Cook another 5 minutes or so until the gravy thickens, and also to cook away any raw flour flavor.

Pour the pie
mixture in a casserole dish, cover decoratively with the sheet of puff pastry and paint the puff pastry with a beaten egg yolk.

Bake for 30 minutes or until the pastry is light, golden brown. 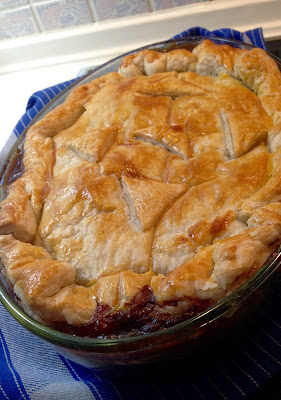 You’ve deprived yourself long enough.  Pop the top on another Guinness and let’s discuss your favorite Irish writers.  On the other hand, we can concentrate on drinking and eating and just say ‘fook it.’ 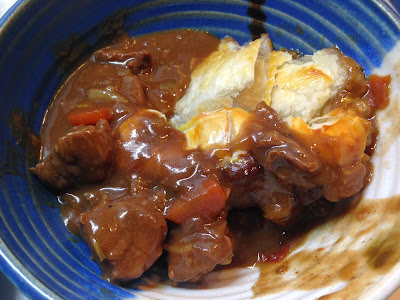 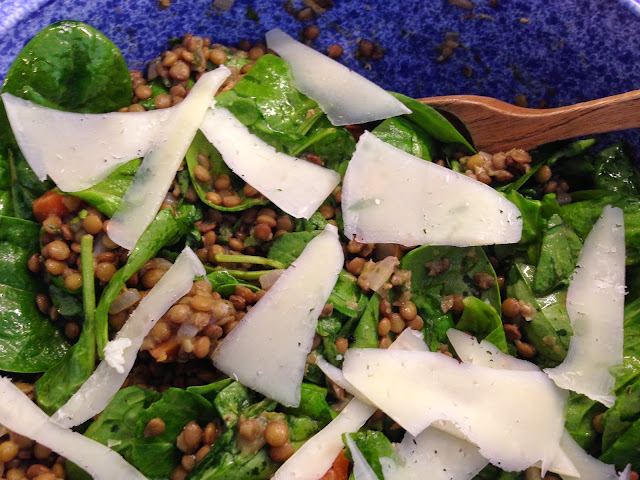 I’m a warm weather guy.  Always have been and now that spring's here, I’m all about backyard picnics with friends, for some sitting, sipping, chatting.  Those are the good parts, but we all know preparation for entertaining guests can be a wild beast if you let it.

Here’s a recipe for keeping things simple, so you can help yourself to a cool one, relax, and still impress your guests.

Number one:  Do it yourself bacon-lettuce-and-tomato sandwiches.  That’s the basics.  Want to fancy it up?  Try some different breads and spice up the mayo with a couple of dollops of pesto.  Put it out and let them busy themselves making a sandwich exactly as they like it.  Add a plate of spiced olives to the picnic table.

Number two:  For something different, whip together a very easy lentil salad. Make it ahead and serve it at room temp.

Salt and pepper to taste

Put the first three ingredients in a pot, cover with water and bring them to a boil, then simmer for 30 minutes, or until lentils are just tender.  If you need more water, add it. 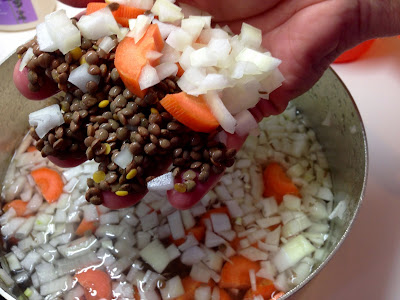 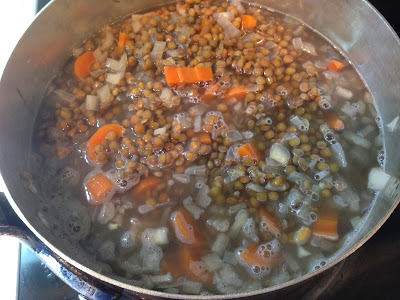 Drain the cooked mixture and set it aside.

While the lentils cook, make a simple vinaigrette: 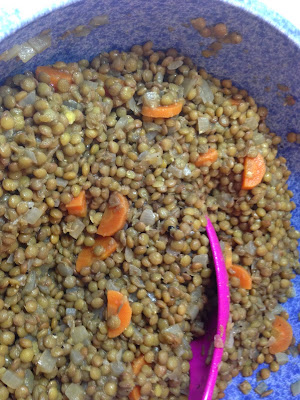 Whisk everything together and when the lentils are barely warm, mix in the vinaigrette and fresh herbs.  Set the bowl aside for the flavors to meld. 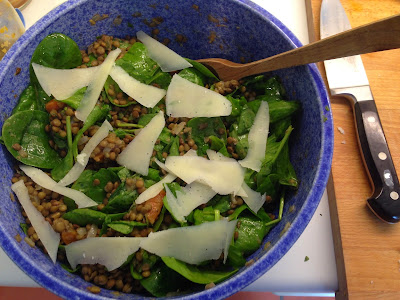 Before serving, whisk together the remaining oil and vinegar, and pour it over the fresh spinach.  Blend in the spinach with the lentils and put the cheese shavings over the top.  Presto!  Easy and everything is done and waiting before the guests arrive.

I’m not only a warm weather guy, but also a lazy guy.  Join me. Take a seat.  More bubbly?  Sure, why the hell not? 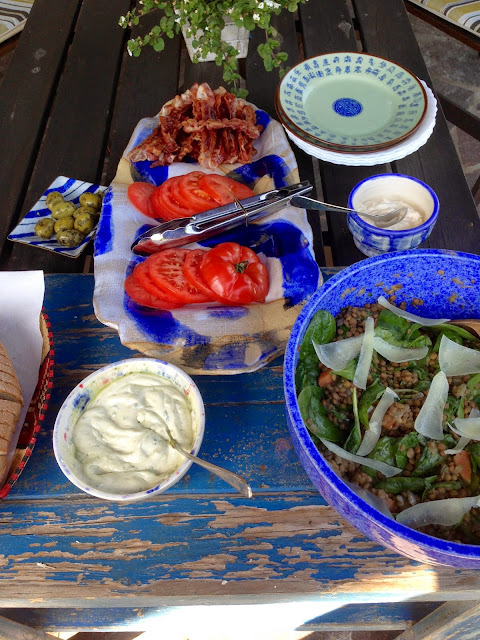 Make Your Own Vanilla Extract and Yogurt 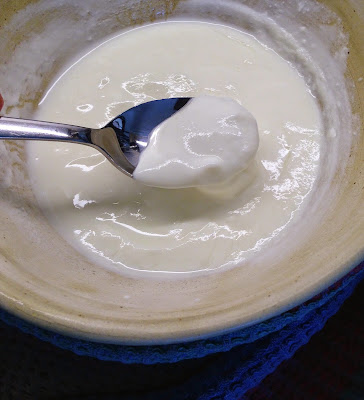 You can’t do everything yourself.  Appendectomies and winning a horse race come to mind.

But, in my humble opinion, when it comes to food, too many consumers think ‘ya gotta buy it.’   Fortunately, more and more, “We few, we happy few..” (Shakespeare, Henry V)  explore how to grow our own herbs, make our own salad dressings, and even brew beer.

Lately, I’ve run across a couple of more things to add to my ever-expanding repertoire.  Both of them are very simple, for my simple mind.  Yogurt.  Vanilla Extract.

Ever price vanilla extract?  $4 to $8 per small bottle!  You might as well be buying shots of whiskey at an upscale bar.  Well, you sorta are.  Vanilla extract has only two ingredients, vanilla beans and alcohol, eliminating the need to take off shoes and socks to finish counting. 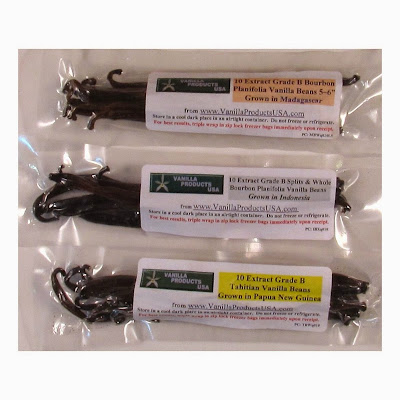 For the alcohol, I purchased a very cheap vodka (less than $10 a liter), and ordered a package of 30 assorted vanilla beans from Amazon ($12.95).

Here’s the process:  Pour out a little bit of the vodka (I suggest a vodka tonic.), but only enough to make room for the beans. Cut the vanilla beans into half inch pieces (no need to split and seed the beans), and put them in the vodka bottle.  Shake the bottle once a day for 30 days.  Presto!  Enough vanilla extract to last a lifetime of baking.  Or, you can do what I did;  buy some cute little bottles and make gifts for your half-baked friends. (See photo at the top of the page) 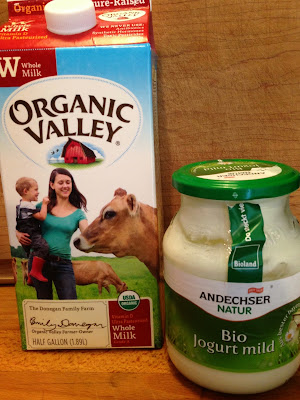 On to yogurt, which is so simple even a knave or a fool can make it.  Buy a quart of milk, pour it in a saucepan and bring it to a boil.  Let it cool.  Stir in a couple of heaping spoonfuls of yogurt that has active culture.  Put the mixture in a bowl, cover it and let it sit on a kitchen counter for a day, or about 12-15 hours. 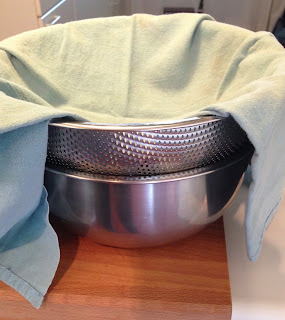 When it’s thickened, strain the new yogurt through a clean dishtowel, just to separate out some moisture and make it even thicker. Cover the bowl and store it in the refrig for the creamiest and most flavorful yogurt you’ll ever taste. 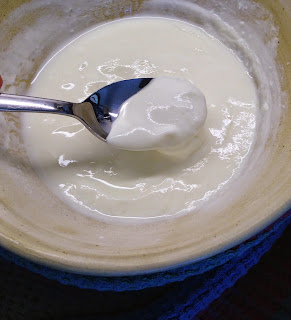 See, it’s just not that hard to be Mr. Culinary Cool.  And now, at the next Super Bowl party, you can brag to your brawny pals who related how they pressed over 300 pounds.  “That’s nothing!  I made my own yogurt!” 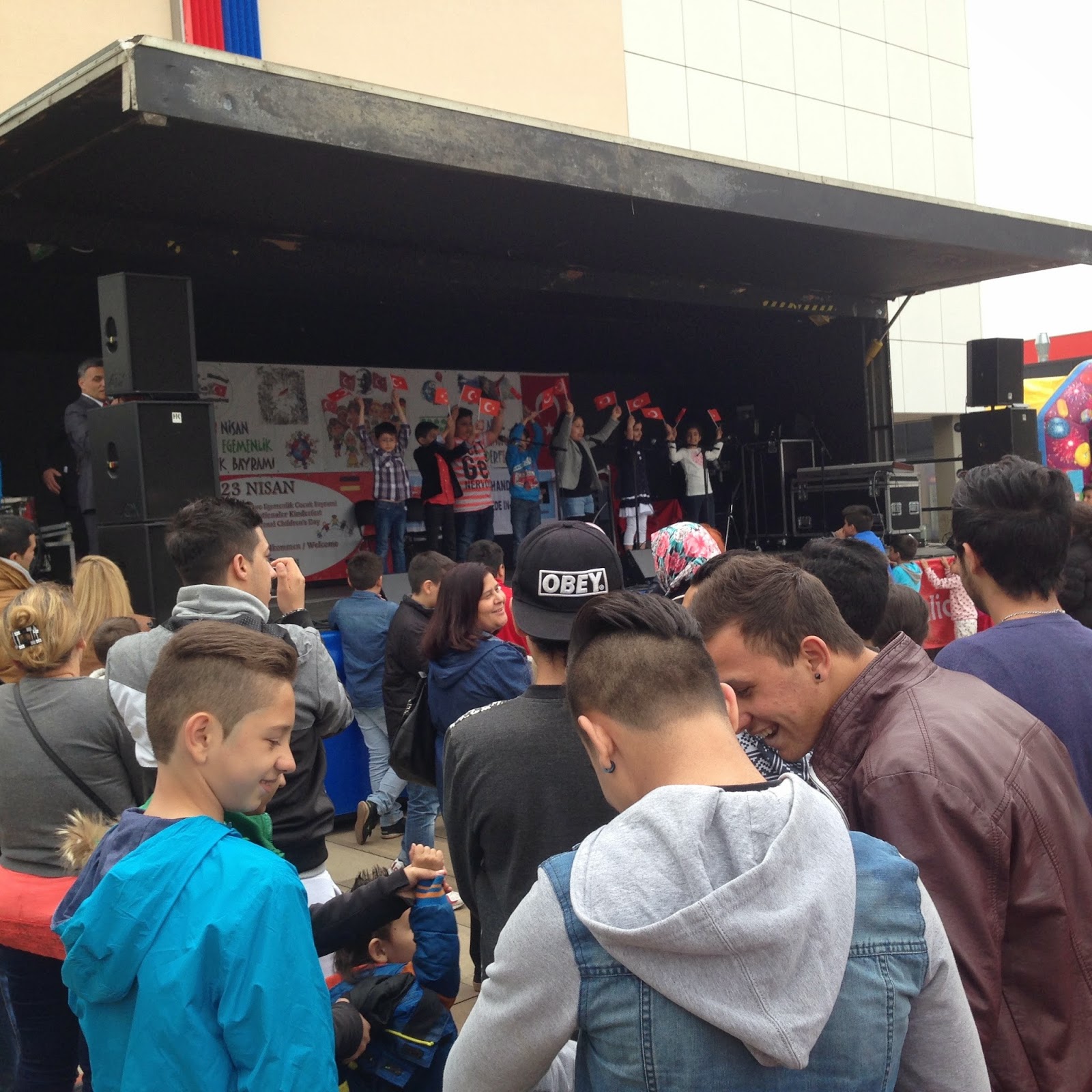 Homburg is a lively town.  Fests just about every week in fine weather.  Later in the summer there’s an Italian Fest, which is always a wonderful amalgam of wine, opera, pizza, Italian pop music, jazz, and pasta.  (13-16 August 2015)

But, last week was about Turkey, with an emphasis on food, more food, lots of smoke from charcoal grills, light musical entertainment, and a few active games for the kids.  Stilts.  Foot pedaled platforms.  Pull momma’s skirt and Watch Her Spill Her Food.  Who’s Got the Loudest Scream.

Heavy emphasis on kids.  I must have seen four or five musical numbers involving Turkish kids, although not all Turkish music.  Catchy, repetitive American Top Forty selections were a big favorite, with up to twenty young kids on stage, jerking and dancing, and singing along in preparation for becoming big repetitive stars.

I like Turkish food.  Lots of grilled, spiced meats, and breads whose delicious smell will lead you by the nose and polish your palate.  Lamb is very popular in Turkey, but here in Germany, lamb costs about the same as chateaubriand at a three star Michelin culinary palace. For meats, this fest stuck to beef and a bit of chicken.  They didn’t have the big tandoori-style ovens for the bread, so they used what looked like flour tortillas and probably were.  I miss Turkish bread.

I remembered, however, that gozleme, which looks exactly the same as flour tortillas, but stuffed with fresh cheese and spinach, is a popular Turkish street food. A coterie of Turkish maidens did well with their versions, using electric hot plates and various savory fillings. 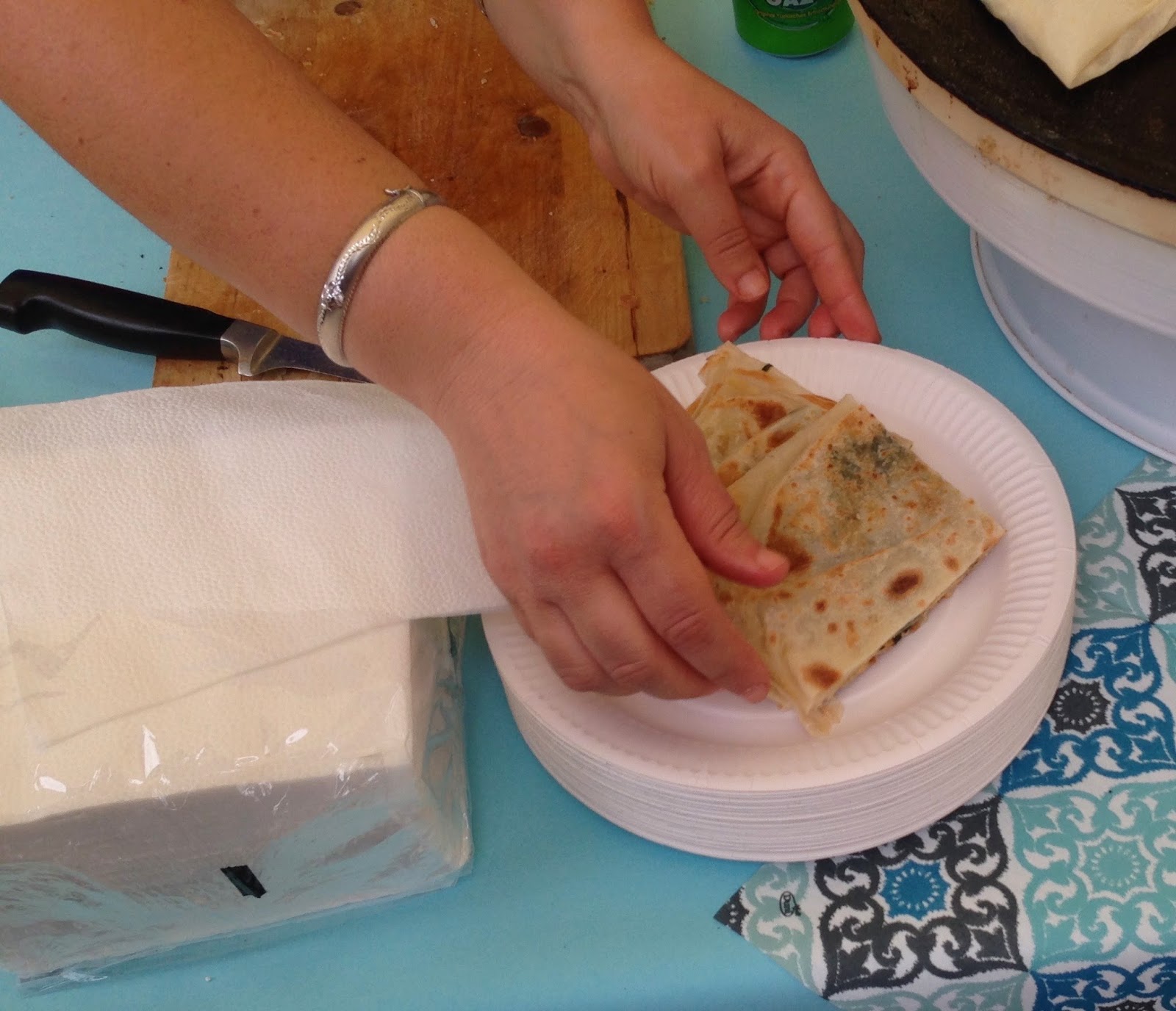 Adana kebab is one of my favorites, and the beef version was excellent.  Ground meat, seasoned with cumin, red pepper flakes, and various other seasoning, grilled and served on flat bread with a generous helping of marinated salad.

And, who can forget the most famous dessert from the eastern Mediterranean region, baklava.   Lots and lots of variations besides the well-known version of layers of phyllo dough, filled with ground nuts, slathered in butter, and baked in a good soaking of sweet syrup.  Kadayif is similar, but made with something resembling shredded wheat. 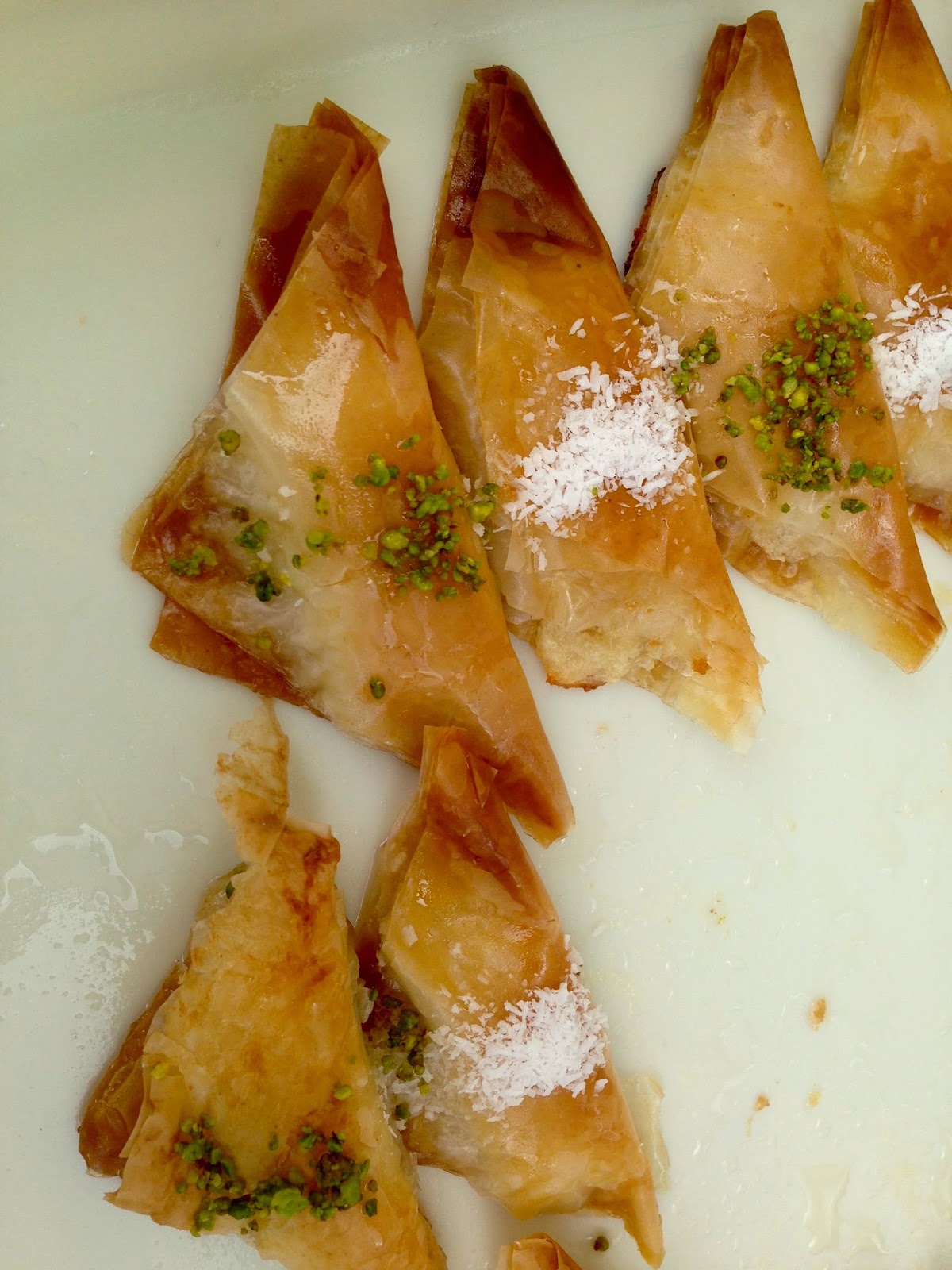 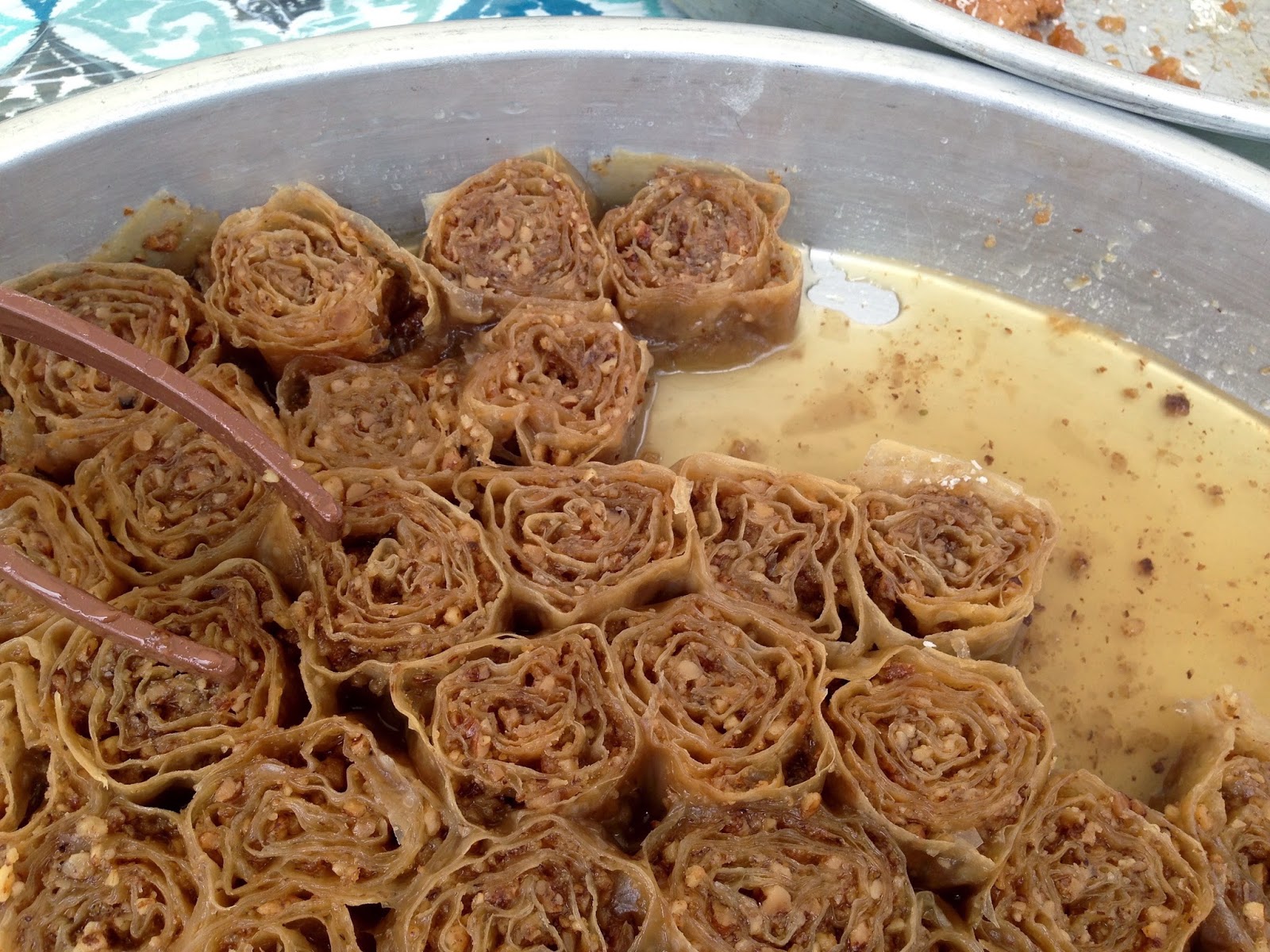 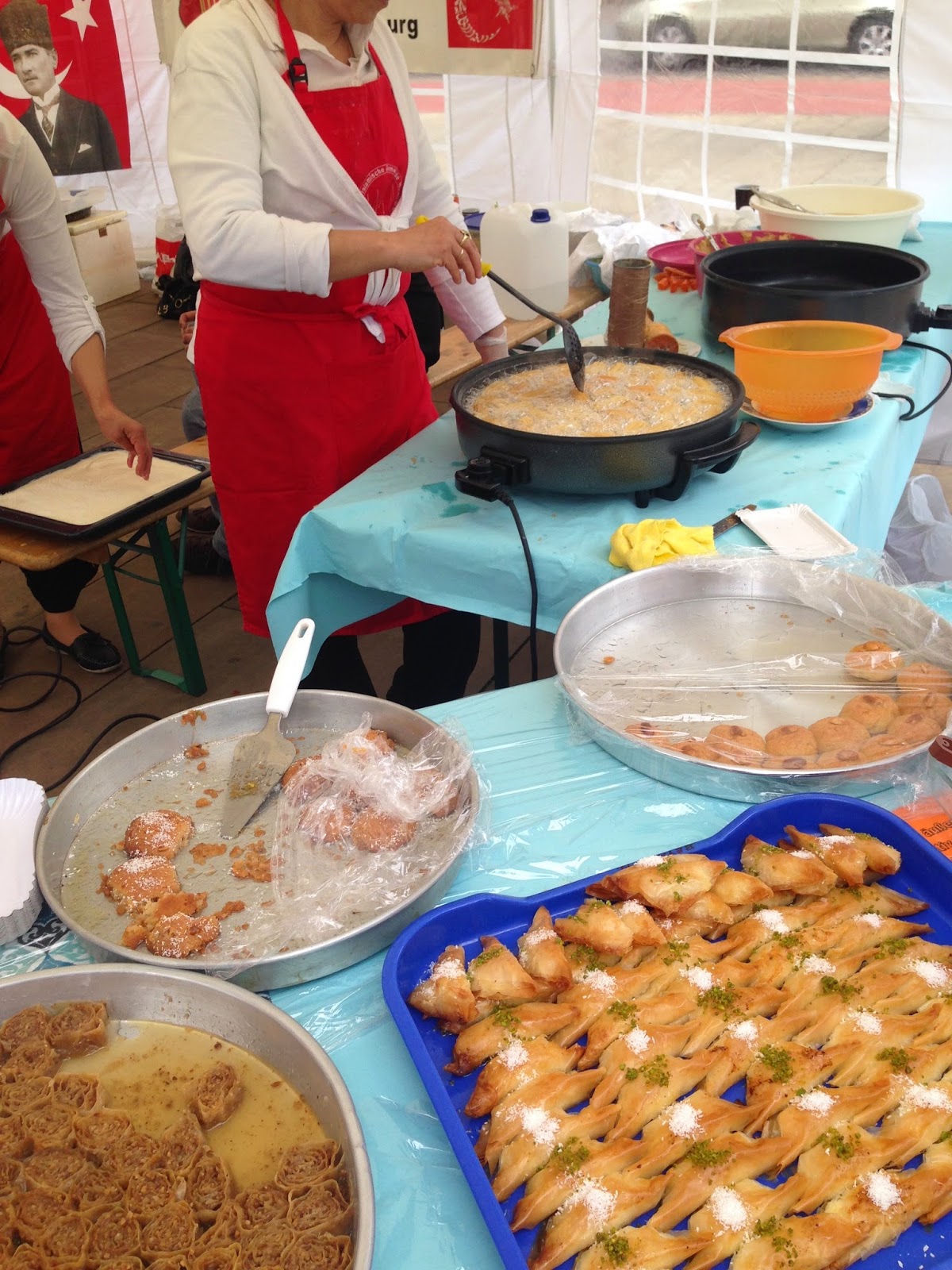 So, yes, I stood too close to the grill and got smoked in the process.  But, the Adana kebab was close to perfect.  Then, I hit the dessert line and had one of each, which made the scarf-clad ladies laugh and mutter in Turkish something on the order of, “That handsome brute loves my cooking.  I must invite him to my house for tea, while my husband-who-ignores-my-beauty slaves at the office.” 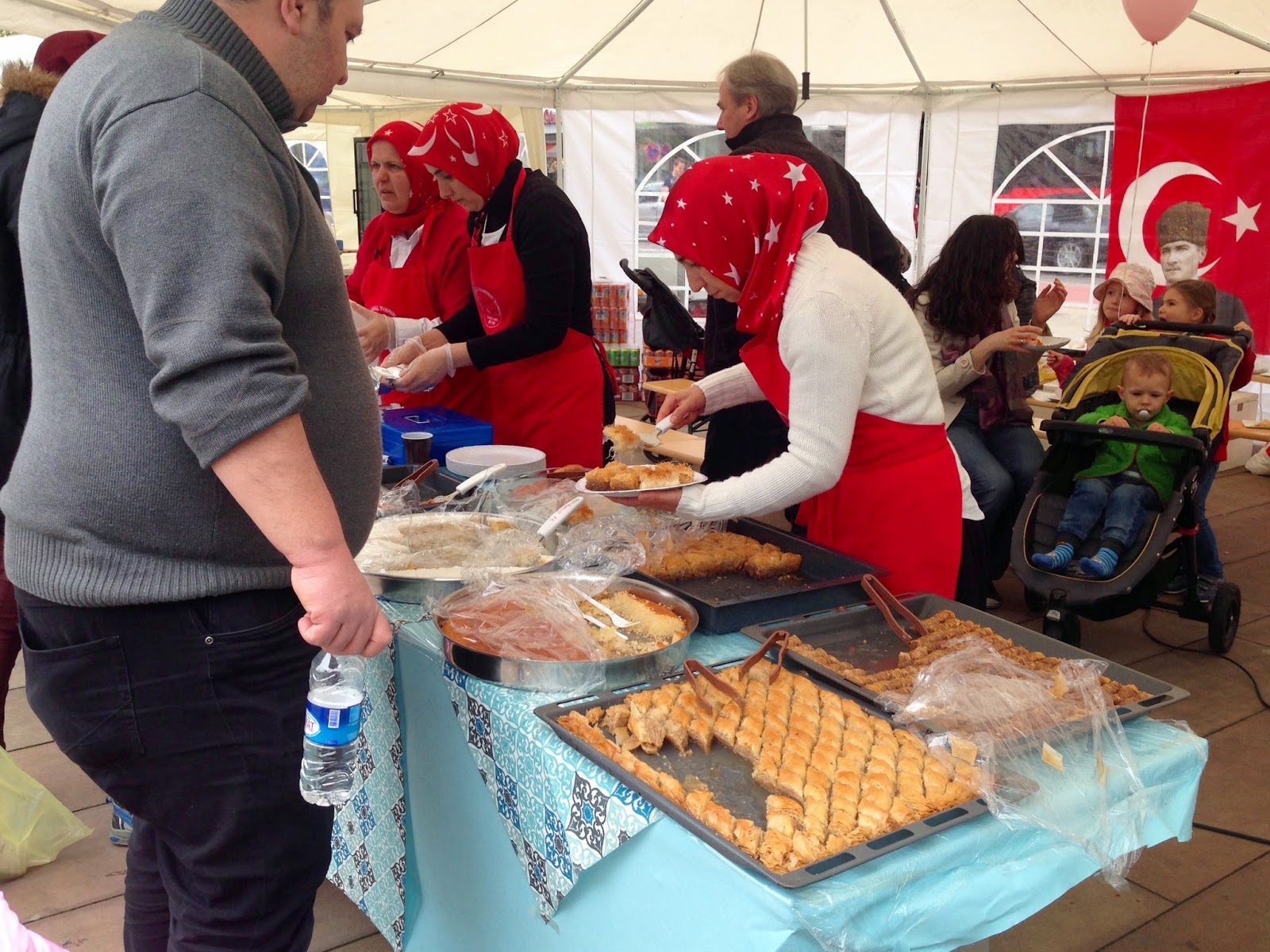 As you might imagine, I loved the Turkish Festival.  Now, if I could only find that damn address… 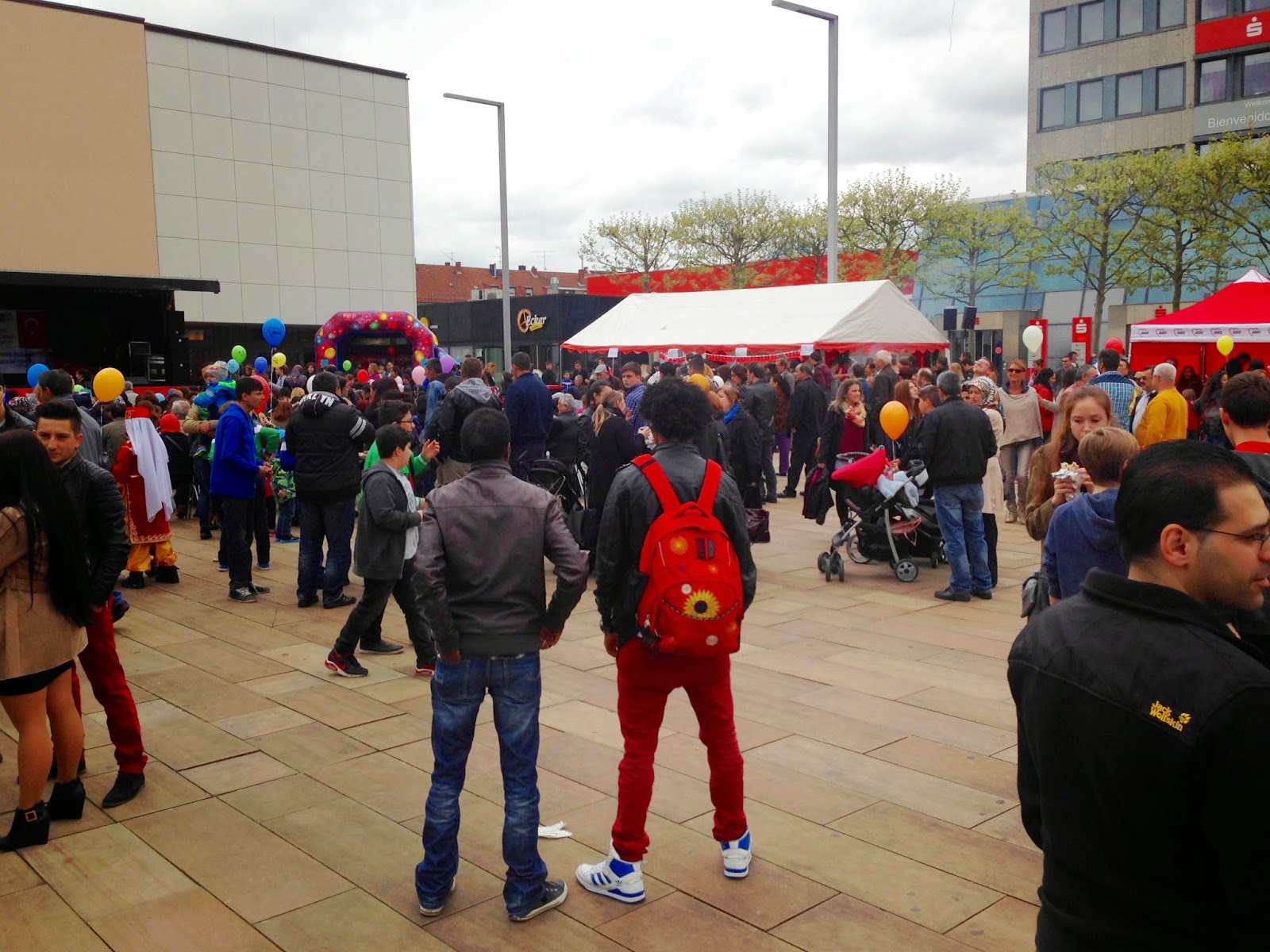