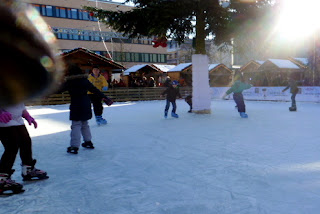 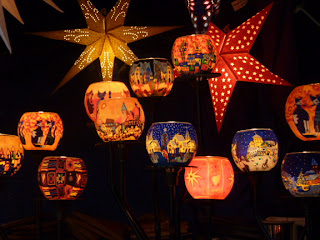 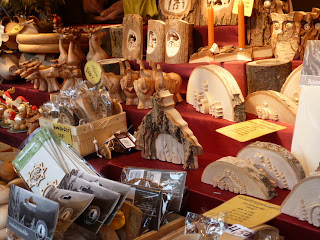 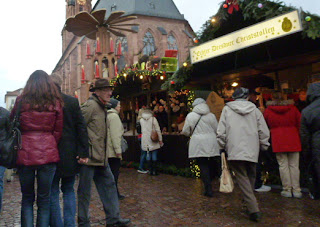 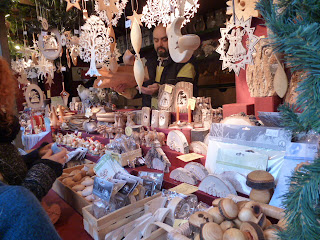 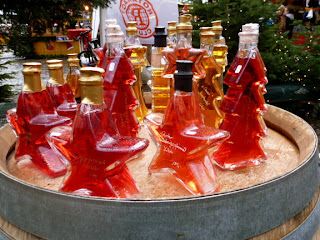 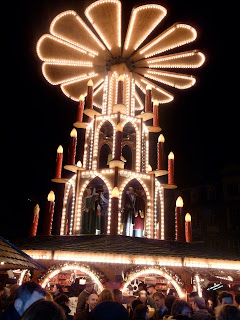 Christkindlmarket means Christ Child Market.  Weihnachtsmarkt means Christmas Night Market.  Whatever title you choose, they all mean bright lights, Glühwein, wurst, potatoes, and lots of little thingies to stick on and under your Christmas tree.

What is Glühwein anyway?  In English speaking countries we call it mulled wine.  In German, glüh means glow and you only need a sip to understand the name.  Usually made with red wine and served hot and redolent with spices, you can get it with or without a shot of schnapps or rum.  Either way, the glow translates with ease and on a chilly, red-nose-day, there’s nothing like it.

The recipe is simple and here’s a site for a good one: http://www.food.com/recipe/gluhwein-81041

Almost every German town, from the smallest to the teeming metropolises has a Christmas market.  Depending on the location, they run from late November to late December and sometimes even into early January. The tradition goes way, way back.  Matter of fact, the one in Vienna dates to the 13th Century.

If you’ve seen one, you’ve seen ‘em all, right?  Not quite.  Different parts of Germany and Austria have different food specialties and the vendors differ everywhere you go.  Woodcarvers come out of the woodwork to sell their wares.  Fanciful Christmas lights wait for you to take them home.  Steam comes off the grills as a chef rakes at the roasting potatoes and grilled meats.

Personally, I like the big markets in the big cities.  They’re spread out and aglow with never ending lights.  Besides the lighted booths, you see gigantic ornaments the size of houses.  In the bigger markets, the stores stay open at night.  Sometimes an ice rink beckons.

A Christmas market is a happy place, as well it should be this time of year.  Once you start, you won’t want to go to just one! 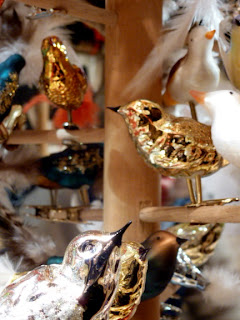 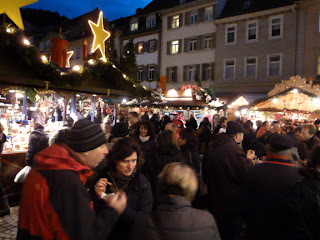 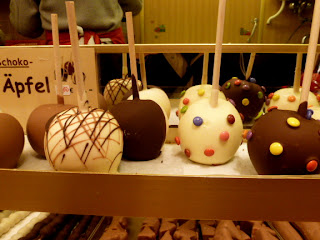 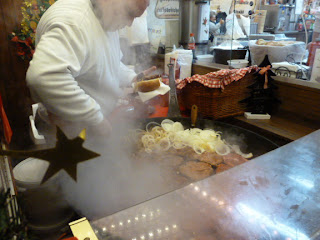 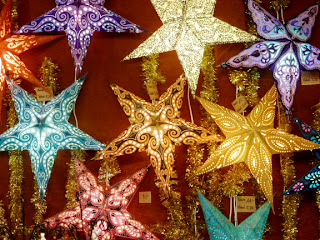 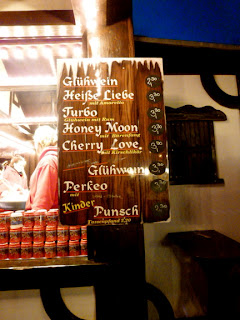 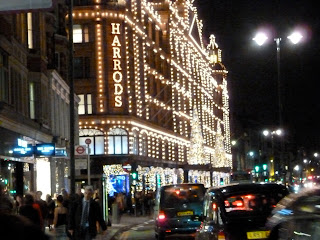 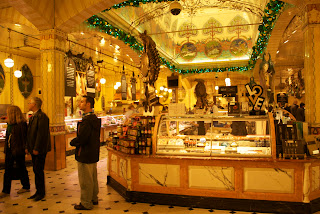 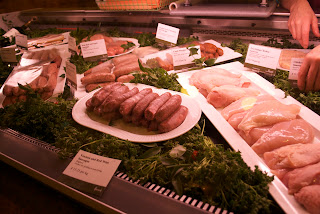 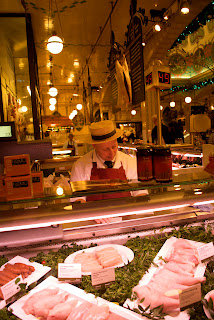 (Be sure to scroll down for more photos and a recipe.)


Been to Harrods? It’s the massive pillar of London’s upper crust section, Knightsbridge.  Ya gotta go.  More than just another department store, it’s a sight, a destination, a one of a kind playground for eyes, imaginations, and pocketbooks.

But, like anything else, to get the most out of a visit, you really should know a bit about what you’re seeing.  Harrods stands as towering reminder of the enduring entrepreneurial spirit of its founder, Charles Henry Harrod.  Chuck, as he has never been known, opened his one room shop in 1849, selling tea and groceries, and employing two clerks and a messenger boy.

Since then it’s blossomed into a looming seven floors and over a million square feet of luxury, fulfilling every need of even the most demanding and deepest pockets.  In short, it lives up to it’s motto, Omnia Omnibus Ubique,  All Things for All People, Everywhere.  Check out all the good stuff at http://www.harrods.com/.

Just name it and you can buy it here.  Let your imagination wander.  Yep, they’ve got it!  But, my favorites and probably the world’s favorite sections are the food halls.  No market I have ever seen can match it, either for luxury, quality, or service, with prices to match.  Want to sit at the Caviar House Oyster Bar and enjoy a half dozen?  Well, you’d better know your oysters because the selection includes varieties from all over Ireland and Great Britain.  Go and scoop up a half dozen and at today’s exchange rate you’ll plunk down about $46, or op for the seafood platter, which includes two glasses of wine.  $247.50.

For obvious reasons, being married and having no reason to impress being the main ones, I wander aimlessly, asking questions, peering at the food, and wondering what ever became of man’s natural lust for a bargain.  No bargains here.  The food staff, wearing aprons and boaters attends to your every need, including your finger pointing at sausages you’ve never before laid eyes on, or hanging rabbits, or brightly feathered birds ready for plucking.  “

You’ll have to admit, however, that the berries are perfect, every one of them.  The apples shine.  The joints of beef fit for Henry VIII. The displays are a marvel of panache, and if you plod and poke enough, you can in fact savor a souvenir or two for under ten bucks.  Ah, the meats!  Ah, the teas!  Ah, the breads!  Amen.

Back in 1985, Mohammed Al Fayed, an Egyptian, purchased Harrods for £615 million.  You might remember the name.  His son perished with Princess Diana on that fateful evening of the unhappy car crash.

Recently, Mr. Al Fayed sold the property to the Qatari royal family for £1.5bn, a tiny profit of just under 200 %.

I doubt the sale will change Harrods one whit.  It didn’t before.  Why mess with a moneymaker?  Another thing they won’t mess with is the world famous Harrods’ winter sale, when prices plummet and crowds mash in with a gusto that makes a sardine tin seem roomy.  Want to get in on this year’s action? Be there at 9:45 am on Wednesday, 26 December, when Cirque de Soleil’s performance will mark the 25th anniversary of the Harrods Sale, in association with Macmillan Cancer Support charity. Doors open at 10am for all the credit card waving bargain hunters.

Until then, here’s a bit of the English table to keep you entertained, a recipe from Harrods.

2. Heat the oil in a non-stick or heavy frying pan on a high heat, and fry the beef until it is browned on all sides. Remove the meat from the pan and set aside to cool for about 15 minutes.

3. Reduce the heat and add the onion, parsley and mushrooms to the pan. Season with salt and pepper. Fry for a few minutes, then remove from the heat and leave to cool. Add the crumbled Stilton and stir gently.

4. Roll out the pastry into a rectangle slightly wider than the beef and long enough to wrap completely around the beef. With the longer side of the rectangle nearest you, spread the Stilton mixture onto the pastry, leaving a 2.5cm gap all around. Brush the edges with beaten egg. Place the beef in the centre and wrap the pastry over it, sealing the edges carefully. Fold in the ends and place on a non-stick baking sheet or in a roasting dish.

5. Cut a diamond pattern into the surface of the pastry, being careful not to cut through it, and brush it with the beaten egg.

6. Bake for about 40 minutes. Leave to rest for 10–15 minutes, then cut into thick slices and serve with horseradish sauce. 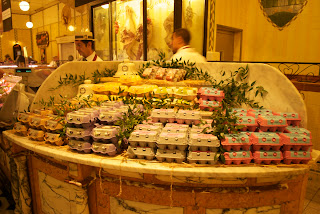 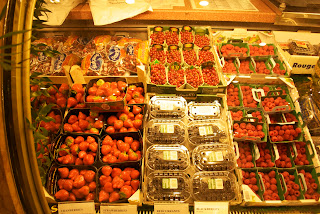 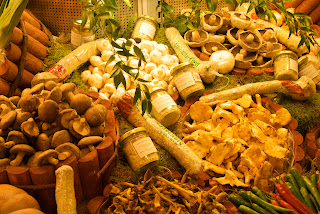 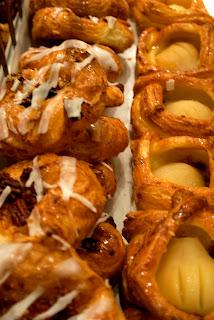 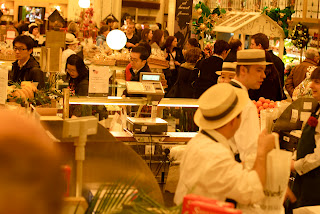 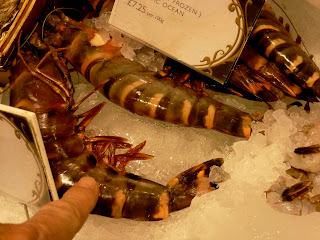 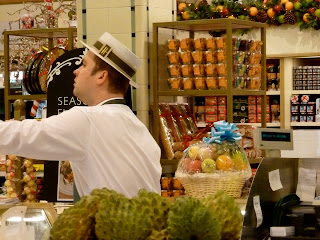 
The first snow has crested the memories of summer.  A chill on the roads makes your car’s rear end shimmy like a break-dancer with chicken pox.  Yes, winter is here and Christmas is plodding forward.  Already the earliest Kris Kringle markets have come and gone.  I have to toss aside my keenness for bravery in the face of numbing cold and drive to my favorite coffee shop.  I also keep my scarf on while I rest, read, and slurp.

Happy cooks and their eating companions will also note it’s the season for Christmas cookies.  Germany has a plethora of them, and almost all are made in small batches, even in the bakeries.

A case in point is one of my favorites, Zimt Wafflen, or cinnamon waffles.  They’re not waffles as we usually think of them in the wastelands of North America.  These are thin, small, and crisp, almost like the cinnamon equivalent of gingersnaps, except ginger snaps are round and thicker.  The nut brown Zimt Wafflen are as thin as a dime, and square.

The other day, as I crept into the coffee shop, heralded by a hearty call of “Guten Morgan!,” I immediately caught the soothing air of fresh bakery goods, as I usually do, but this time the fragrant aroma held the spicy surprise of cinnamon.  A young woman had two special waffle irons going and a huge box in the process of being filled with these square wonders only found at this time of year.

As I’ve said many times before, some of the things I love about Germany are the seasonal tastes.  New potatoes are advertised in the fall, strawberries fill the fruit stands in late summer, new wine and onion cake are served only in the early autumn.  And, if you want to try some Zimt Wafflen, you better grab a handful now.  Their time has come.

Sit back, pull up a plateful and sip some Milch Caffee with me.
Posted by foxone12 at 3:33 AM 2 comments: