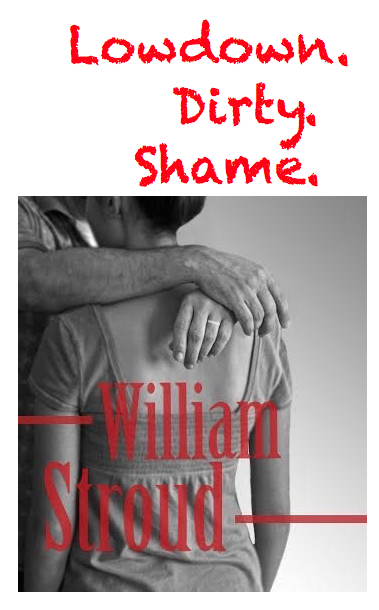 Dear Sir or Madam, enclosed is a teaser for my newest novel, but first…

“Too much sex and violence for me!”  Wait a sec!  You can have too much sex?  An old wives tale.  Very old wives.  Wives with dementia.

“Laugh out loud funny!”  My fervent hope is the reader laughed at the right places.

“I don’t buy books.”  For your vigorous resolve, my poverty stricken family applauds you with hunger-weakened hands.

“The part I liked best was….now I can’t remember.”  What was your name again?

“I thought things like this could never happen, and then my wife found the photos.”  Delete, delete, delete.  Never forget these words.

For those of you, and by that I mean the billions of you around the world that have not had the supreme pleasure of reading my latest scabrous tale of the small town South, I offer this encapsulation:

Jack Hudson is in a pickle. He’s not a private investigator; he’s a small town, small time writer. But, when a well-to-do acquaintance and fraternity brother asks him to check on his wife, Jack is all ears. He has good reasons. The fraternity brother’s wife and Jack are on better than speaking terms, if you know what I mean, wink, wink, nudge, nudge. The job sounds simple and there’s money on the table for just one night of slightly perverse snooping. But, simple things aren’t. Now the wife is missing, Jack is accused, Jack’s other girlfriend is again tangled with her ex-husband, the fraternity brother’s first wife may also be missing, and Jack’s simple life is instantly scrambled and scattered across Cassavora County, several other counties, New Orleans and Charleston. Oh yeah, Jack’s brother may be part of a criminal conspiracy, Jack’s mother is on her last legs…Damn, I know your heart is pounding just thinking about it!

Ready for a sample?  Something to whet your curious and slightly deranged appetite for twisted mayhem?  Keep reading!

Final words to faithful readers:  William Stroud, Amazon, Lowdown. Dirty. Shame.  Paperback and Kindle.  Be sure to write a brief review on Amazon! 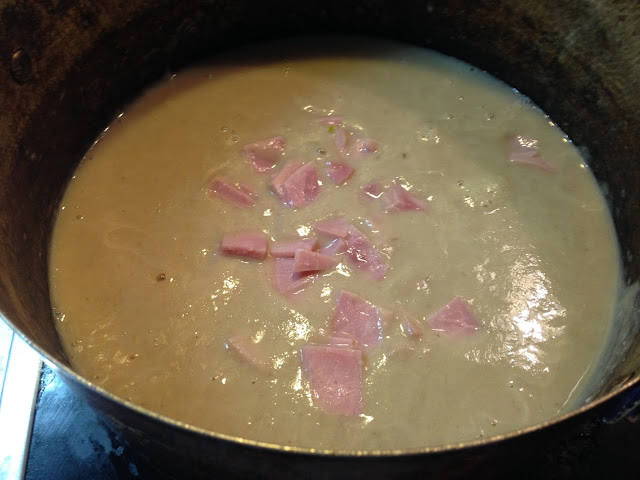 Where I live, it’s still sturdy soup weather.  Mornings and evening send a chill to the bone.  I sport scarves and gloves, along with designer sweaters and Gucci winter jackets.  Baloney, I’m not living in Paris!

But, I do wear all those accruements, minus the labels. Ok, go ahead and call me a whimp.  I’ve been called worse by red-faced men wearing uniforms and carrying weapons.  Fortunately, the fine wasn’t much and now I always remember my driver’s license.

But, what I really want to introduce you to is the result of playtime in my kitchen, with limited ingredients.  Turns out you can do a lot with a little and in this case it turned out more than a little delicious.  Served this soup to a captive audience, but I did untie one hand so she could use a spoon.  ONLY KIDDING!  I untied both hands.  STILL KIDDING!

This is another of my fave low carb recipes.  Too often low carb translates to very high fat.  Not in this case.  Lean protein, a dash of heavy cream, a bit of butter, and the rest is vegetables.

Here it is: Simply Delicious Ham and Cauliflower Soup 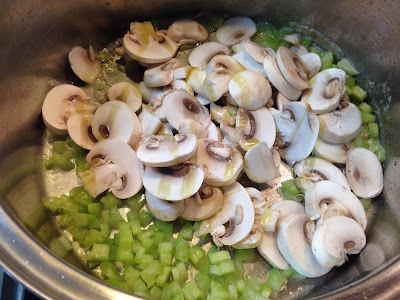 Melt a pat or two of butter in a large saucepan, add a dash or two of olive oil, and sauté the diced celery and sliced mushrooms until they are soft.  Add a teaspoon of salt.

Add the chicken broth, sprigs of thyme, and Liquid Smoke.  Bring to a boil.  Add the cauliflower and half the ham.

There is a drawback to putting scalding soup in a countertop blender.  As I found out.  Stick to blending one or two cups (at most) at a time.  Safer and less scalding.

Put the liquid soup back in the large saucepan, stir in the cream and the rest of the ham.  Add a dash of freshly ground pepper, if you want. 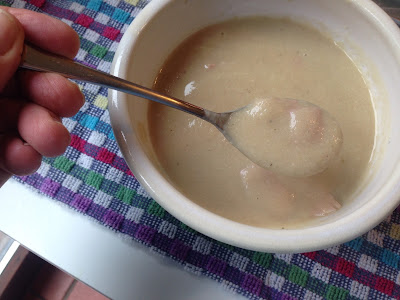 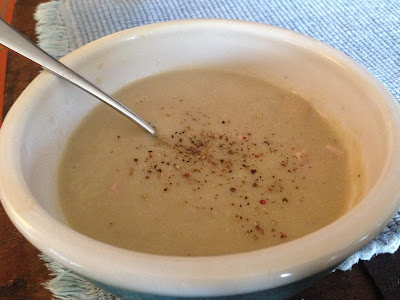 Voilá!  Pour the wine, serve your guests.  Another warning.  You’ll dream about this ham and cauliflower soup and wake up wanting it for breakfast.  So, make enough!
Posted by foxone12 at 3:43 AM 2 comments: 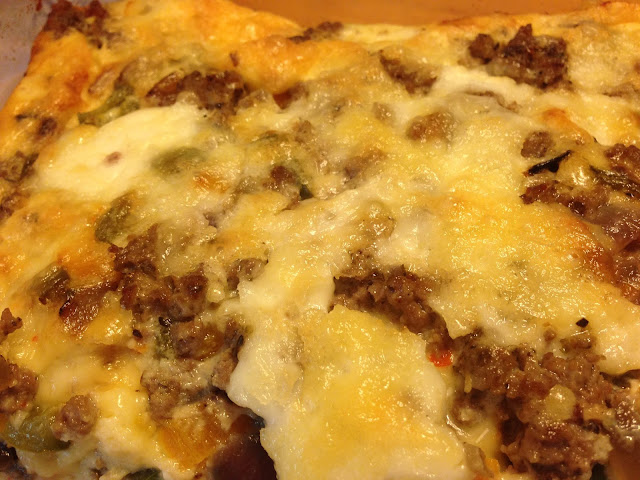 No, you have not had sausage and eggs like this supremely delicious offering.  Not at Denny’s, not at McWhat’s it, not in Aunt Julie’s Emporium for Holistic Eating and Meditation, although, you will be thinking about this meal for a long time.

The secret is an unusual ingredient, not in the same sense as pickled Madagascar squirrel, or Chinese wrinkled yeast, just something not normally found in culinary association with sausage and eggs.

This is a dish you’ll want to serve for breakfast, lunch, and dinner.  At lunch and dinner, I like to add a cucumber salad.  And afterwards a medicinal brandy or two.

If you’re not using a commercial sausage:  Put ¾ pound ground pork, or beef, or a mixture in a bowl.  Add salt, pepper, and the dried herbs.  Toss in 1/2 teaspoon of red pepper flakes and mix well. Not trying to make this HOT, just enough red pepper to put a slight tingle on the tongue.

For either commercial or homemade versions, add a little oil to a frying pan and fry the sausage, breaking it up with a spatula as much as possible. When it has lost it’s color and beginning to brown, take it off the heat and set it aside. You want the sausage cooked, but still juicy.

In another frying pan, add a tablespoon of oil and fry the onion and bell peppers, only until wilted.  Set aside. (All you’re trying to do is cook the onion and peppers a little bit and also remove much of the water.)

Crack the eggs into a mixing bowl and add the coconut milk. Toss in salt and pepper to taste, along with just a pinch or two of red pepper flakes.  Mix well.

Putting It All Together in Three Layers:

Rip up the ball of mozzarella and scattered it evenly over the top.

Let the dish rest about ten minutes before serving.

Serve with Pinot Grigio, you wild man!  Even at breakfast?  Damn straight! 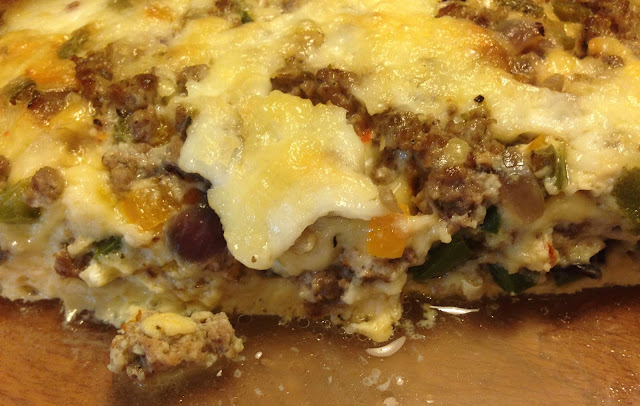