Off to the German Bakery 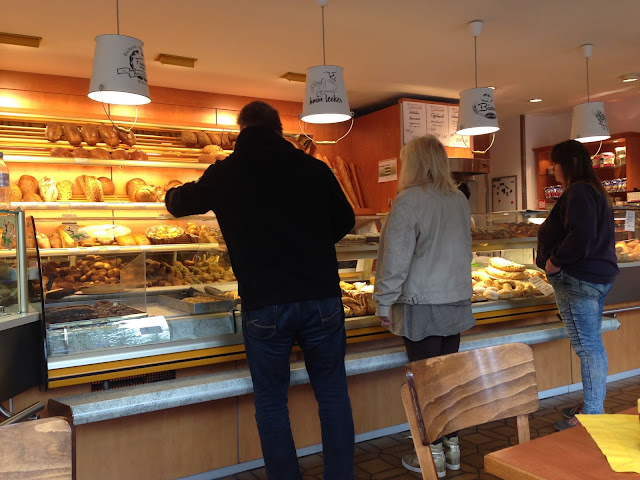 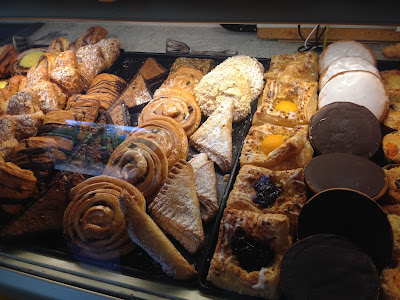 Making my morning trek to the bakery, I often listen to French lessons on my iPhone.  Why French?  Lots of explaining to do, but to continue:

So, this very odd American strolls down the street casting out a string of very random phrases in French. Nobody seems to be with him and no one dares approach to ask.

I don’t understand what you mean.

You don’t understand what I mean?

Do you understand what I mean?

I am excited to understand what you mean.

I didn’t understand yesterday, but will try to understand what you mean today.

Understanding what you mean is very important to me.

Does this mean you understand me?

Can you understand me when I tell you what I mean?

Some people only stare and Germans are among the world’s best starers.  Others gather their children protectively.  Those walking their dogs cross the street and readjust the leashes.  I smile.  They clutch their children closer. 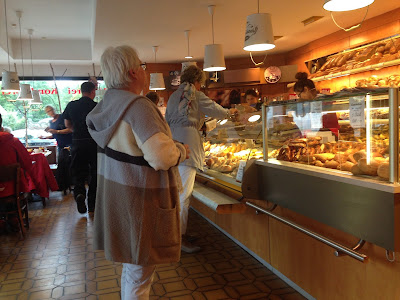 The German bakery (Bäckeri), just fifteen minutes away, is my German wakeup.  I chat with random people, know most of the staff, read a book, drink a couple of coffees, and munch a redolent roll just retrieved from an industrial oven that billows out steam and fresh bread aroma when a bakery clerk cracks open the door.

D--- is a beautiful woman, in her mid twenties and pregnant with their second child.  She works swing shifts, modified to allow one parent to take their son to the kindergarten.  Yes, Germans use the same word, which in German means Children’s Garden.  Oh, that it were so in every school everywhere.

D---’s husband is a metal worker and the money is good.  Her back aches some.  Her baby is doing fine, but she sometimes has morning sickness.  I pull a trashcan over and she smiles.

The apprentice program is still a bulwark of jobs in Germany.  Electricians, carpenters, bakery clerks, plumbers, as well as office workers all serve an apprenticeship of some length. For bakery clerks it’s a couple of months, long enough to impart sufficiency in every phrase of the operation. And it’s a big operation, with not only more than half a dozen satellite outlets, but also trucks leaving for deliveries to shops and restaurants and grocery stores in a steady flow of morning traffic.

Some of the ladies here have been here for years. Pleasing smiles and welcoming attitudes are ingrained.  Every customer is respected and the customers are varied. Some workers in well-worn work clothes come in for a coffee and roll to go (to take with, in German), others want a sandwich.  One woman, whom I believe works at a nearby kindergarten, strolls out with a huge sack of rolls every early morning.  If you get there at 0730, you’ll have missed her.

Interesting how the clerks ask the questions in a different way than we do in English.

Instead of “Anything else?” or  “Is that it?” the Germans say, “Another wish?”

M--- is a longtime counter clerk and she always asks about my family.  “How’s your wife?”

“My wife?  I’m not married.”  I pat the seat beside me.  M--- gives me a reluctant smile or grimace.  Hard to tell.  With a dismissive wave, she goes back to work.  But, she does come back later and steps much closer. 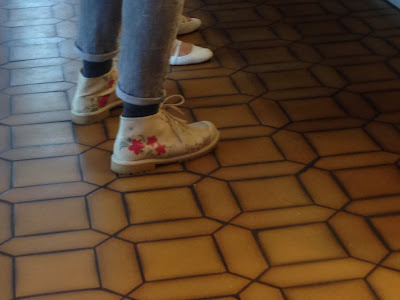 Mostly it’s the people that keep me coming back, but it’s also a very nice and comfortable spot to observe the changing of the seasons based solely on what customers are wearing.  They’re in scarves and jackets now and the parade of folks is as interesting as their sartorial styles.  Open toed sandals have given way to clunkier footwear. The young mothers push one well-wrapped babe in a stroller and eye a toddler making a mess of the glass on the display counters.  Retired men and women sit at one of the three tables and chat while they sip milk coffee and pack in enough sweet rolls to supply Mrs. Betty Buns’ obesity club.  The older wives come in, dressed to the nines, the way American women used to dress before our culture gave up the ghost. 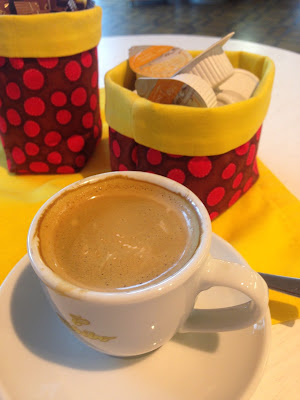 From my experience, German bakeries serve as the same kind of social leveler as pubs do in England.  Everyone is welcome and everyone comes by, even if a strange American comes through the door spouting unrelated sentences in French. 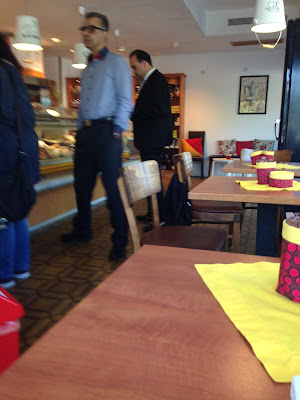 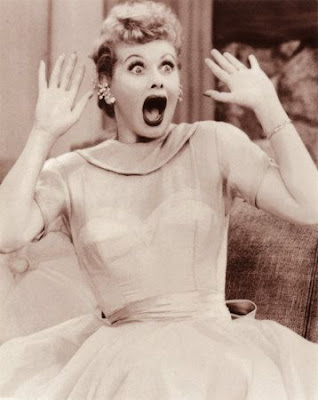 I’ve got good news and bad news.  The good news is I'm with child.  But, you’re not the father.

I thought you said there was bad news.

I’m so ashamed of my affair that I could just die!

That’s why I brought the Glock.

I hate to tell you this…

It must be good news.

Can you ever forgive me?

My lawyer says no.

I’m going to do you one big favor…

I was hoping you’d let me play with both of them this time.

I’m in the mood for love!

This is the last time I’m telling you.

You keep telling me that.

Darling, I love you with all my heart.

Could you throw in some breasts and thighs?

Does this dress make me look fat?

Not if I keep one eye closed and squint.

To tell the truth…

That’s a new one.

Just for the sake of argument, let’s say yes.

I think you mean instant, but let’s speak no more of our sex life.

I think you love her more than you love me.

True, and I was hoping for children.

Have you ever felt so happy?

You want her name, don’t you.

I’m so hungry I could eat a horse.

Father forgive me for I have sinned.

If at first you don’t succeed, try, try again.
She got a restraining order.
Posted by foxone12 at 1:07 AM 1 comment:

A Year in Provence by Peter Mayle 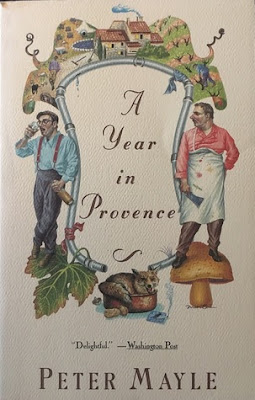 How often do you get the question:  Read any good books lately???  Your mind spins. Your face blanches. Have I read any GOOD books?  Repeating the question buys you time. The qualifier takes your spinning head and begs you to reconsider ignorance vs bliss.

You quickly excuse yourself to rush home to count table napkins.  Meanwhile, you’re thinking one of two things.  Number one:  Were the books I read any good? Or Number two:  Did I forget to read…let’s see, hummmm, have I read anything for the past thirty-six years? Does the Anthology of Little Known Mathematical Equations count?  Or, the video version of The Joy of Sex?

I’ve got a book that will solve your dilemma and make you say with pride and a gleaming smile, I read! A book!  It’s good!  Immediately, in the minds of your insufferably judgmental friends, you will no longer be thought of as just a leaf raker, a calloused thumbed TV lounger, or a swiller of screw-top wine.  You’re an intelluelle, an inter-something…..you're a really smart guy!

So, what’s the book?  A Year In Provence, by Peter Mayle and yep it’s been around since 1989, but some things don’t change.  The entire misunderstandable country of France and the funny way they talk. The quirky ways of the French through the eyes of an outsider.  The dry, rib-wracking, understated Brit humor.  The fun and foibles of visiting a foreign culture versus living there without benefit of room service.

You can’t mention France without starting the food conversation, especially in comparison to English fare.  To paraphrase the French opinion: It is well known the English kill their veal twice.  Once when they slaughter the animal and again when they cook it.

What is it about French food that captures and enchants us? Mayle and his missus soon learn during an evening with the neighbors.

“We had entire breasts, entire legs, covered in a dark savory gravy and surrounded by mushrooms.

We sat back, thankful that we had been able to finish, and watched with something close to panic, as plates were wiped clean yet again and a huge steaming casserole was placed on the table.”  He goes on to describe the rest of the almost never-ending, yet entirely sumptuous meal.  “That night we ate for England.”

But, this book is more than a description of the French table and the country’s undying passion for food. Mayle takes us through the settling-in, and from season to season, beginning with the hazards of buying a car in a country that prides itself on its inefficient bureaucracy.

And how about house repairs and overcoming the natural suspicions of the natives.  How about truffle hunting?

“During the season, from November until March they can be tracked down by nose…the supreme truffle detector is the pig, who is born with a fondness for the taste and whose sense of smell in this case is superior to the dog’s.  But there is a snag:  the pig is not content to wag his tail and point…He wants to eat it.  In fact he is desperate to eat it…and you cannot reason with a pig on the brink of gastronomic ecstasy.”

Or how about a discussion of house insurance?

“One reason, apart from idleness, why we had neglected the matter of insurance was that we detested insurance companies, with their weasel words and evasions and extenuating circumstances, and their conditional clauses set in miniscule, illegible type.  But Bernard was right…we resigned ourselves to spending the afternoon with a gray man in a suit who would tell us to put a lock on the refrigerator.”

Yes, the joy of this book is not only the unabridged humor that echoes off nearly every page, but the sense of being there, of living and breathing in Provence for an entire year, month by month, season by season, through high expectations and convoluted results.

Yes, you will say with certainty, I have not read a better book in a long, long time. 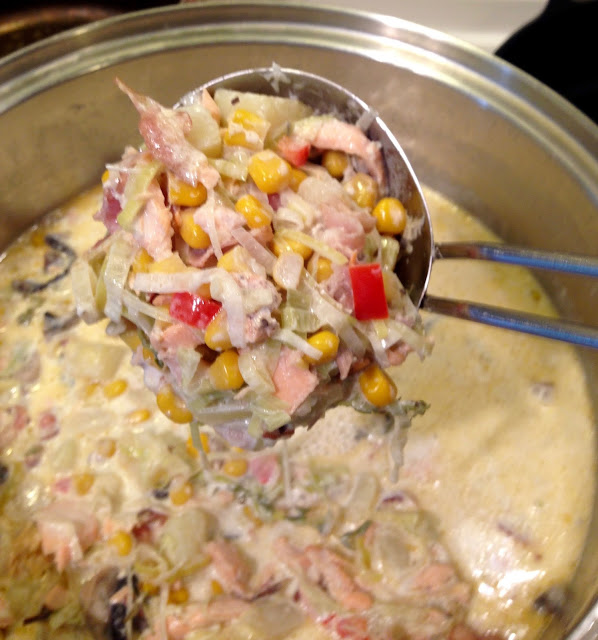 I’m writing for the eternally hopeful, already feeling the bite of chilly air, who mourn the brown, saddened flowers, and stare teary eyed at the leaves cluttering the sidewalk in a maudlin display of self sacrifice.

Yes, my friends, I write for those ill-favored souls who must face the shortened days of dying sunlight and know they can’t make it through the day on brandy alone, even delicious brandy, such as the Armagnac filled water glass I hold in my two quivering hands.  So, first let me take a swallow…perhaps two swallows…make that two gulps…and lead you toward a chowder that will haunt the dreams of the middle-aged who already realize the best years dwell in the shadows of yesterday and dreams of chowder are a poor substitute for dreams of jolly, large breasted women.  Don’t mean to leave out the ladies, who no doubt dream of jolly, large breasted men.

Boil the cubed potatoes in a saucepan of salted water until barely tender.  Drain and set aside.

Cook the bacon in a five quart, heavy pot until crisp.  Remove and set aside.

Salt and pepper fresh salmon, put it on a foil-lined baking sheet and place it in the pre-heated oven for 15 minutes. Remove from oven and roughly flake the fish. 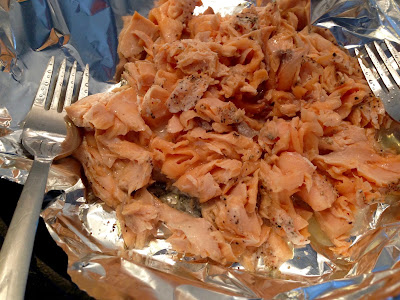 In the same pot you used for the bacon, drain off the bacon fat, add butter and cook the leeks and diced red bell pepper until until wilted. 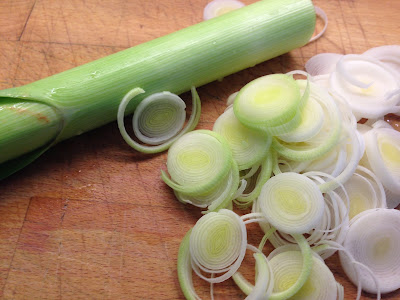 Add the milk, cream, salmon, bacon, corn and thyme. Bring just to a boil, then turn down the heat. Stir and cook 5-8 minutes.

Add salt and pepper as desired.

Serve with some rounds of a freshly baked baguette.

Don't forget to garnish with fresh chopped chives to the bowls of chowder. 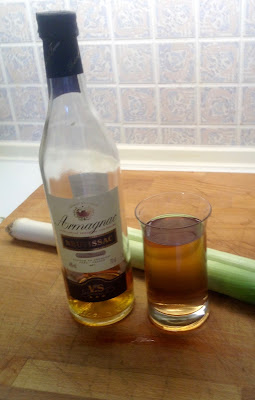 If you still need more help with the transition from summer to misery, I suggest another water glass of Armagnac.