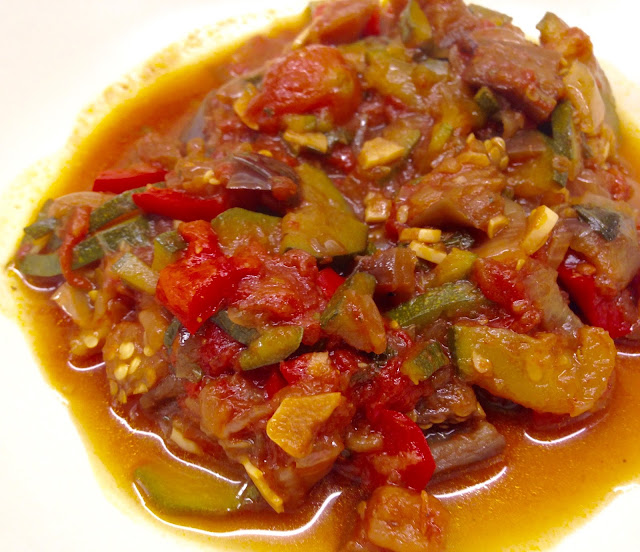 I’m on a tear, cooking something new and special everyday, as my devoted readers have no doubt noticed.  My usual modus operandi is to spice things up with a hop-skip-and-jump blend of travel, book reviews, food and the occasional short fiction.  But, travel won’t start in earnest for another week or so, and I’m between books.  But, still I sally forth to entertain.

You’ll notice my recipes of late have spanned the great divide between healthy low carb entrées and devil-may-care carb-gorging.  Well, today it’s back to low carb and for a couple of very special reasons.

When possible, I like to cook something on Sunday that will fill lunch pails for the rest of the week, which brings me to reason two.  Wives can be very demanding and one thing they demand is variety.  Did I really say ‘can be very demanding?'  I meant viciously demanding. And leave the can out.

What is so delicious that it satisfies a schizophrenic wife…whoops, now I’m being redundant… five days in a row?

I’ve got a one-word answer:  Ratatouille.  The first thing to learn is how to pronounce it.  The A-mur-i-kin version sounds more like Rata-twooy, to rhyme with dewey.  The much more sophisticated French on the other hand…and after all they own the word… say Rata-tu-ee.  Purse your lips when you say the tu part, then soften and slightly lengthen the double e like a French mouse who just learned the disadvantage of being the first one to the cheese.

With a cooking time of four to five hours, this dish screams for a slow cooker, but since I don’t have one, I settled for a conventional oven set at 275ºF (135ºC)

There is no ONE recipe for ratatouille.  My guess is, every wife and scullery maid in Provence has a slightly different approach. So, rather than insisting on just one way to peel a potato, I humbly title this version Ratatouille My Way. 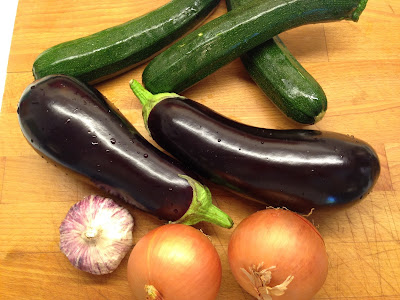 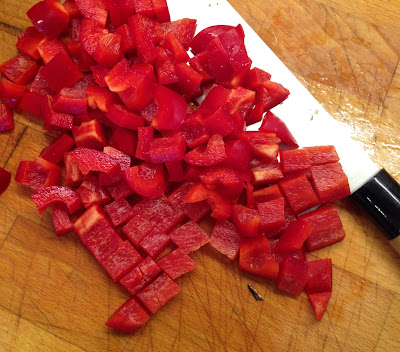 Heat the oil on medium to low. Add the onion and garlic.  Cook and stir until they are limp and barely golden.  Careful not to burn them! 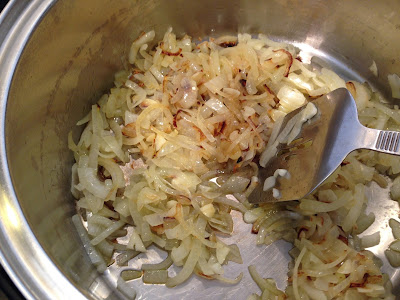 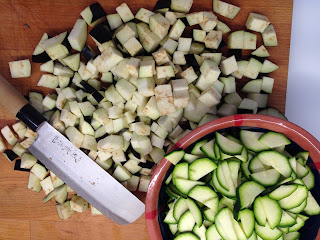 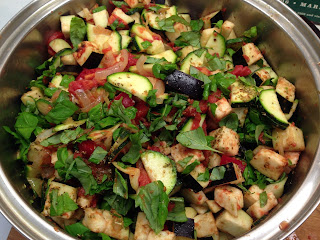 When the vegetables have cooked down a bit and are looking limp, add the hand-crushed, undrained tomatoes, Balsamic vinegar and herbs.  Stir well.

At this point there will be a lot of liquid in the bottom of the pot.  Bring to a boil.

Cover and put the pot in the pre-heated oven.  Cook for four to five hours.  The vegetables should be very soft, but there will still be a lot of liquid.

Put the pot back on the stovetop and bring to a boil.  Stir occasionally and cook until the liquid is greatly reduced.  You’re not making soup!  This is a hearty, filling blend of sumptuous vegetables that can stand up to a hearty meat dish, and demanding wife.

Voilà!  C’est magnifique!  But, don’t forget the wine!  And tell your wife, of course I didn’t mean her! 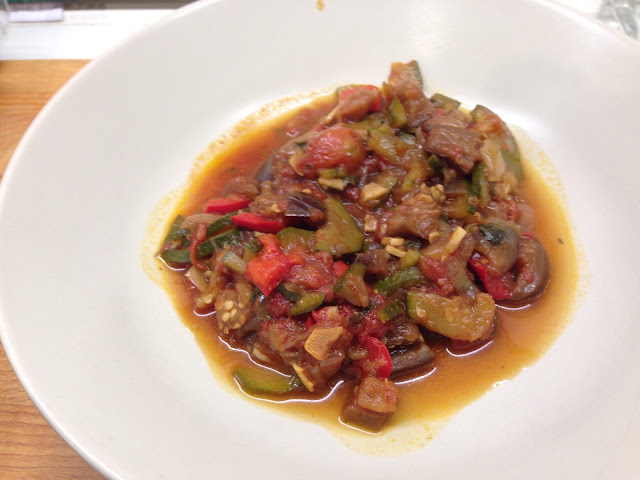 My faithful readers should know by now, I like to keep things simple.  I’m a simple man of simple tastes.  A quiet, tableside martini, mixed by a thin man in a white dinner jacket, in the elegant bar of a five star hotel and you’ll find me serenely happy.

While “Simple wife, simple life” may be a complete fiction, in the kitchen, there’s no need for complexities that drift beyond the male mind’s comprehension or attention span, especially when it comes to baking a superb cake for the ravenous, but unworthy multitudes.

I settle for the masculine outlook:  Huummmm, cake good, me want more! Next time me use fork.

This culinary delight is not the usual cake because this one uses pie filling.  Pie filling in a cake?  Yes, those who are faint of heart, release your inhibitions. Cast aside those dark, spurious doubts. This cake is so simple and delicious you’ll never buy another box of cake mix!  You’ll be able to smile benevolently at the admiring throngs and brag “Naturally it’s made from scratch!  I grow my own heirloom wheat, fertilized by free-range bovines who graze on sustainable native shrubs.”

Snobby, organic eating friends, who often avoid you, will lower their upturned noses and invite you over for a glass or two of wheatgrass flavored champagne.  But, before you accept their invitation, get your wife to teach you about forks. 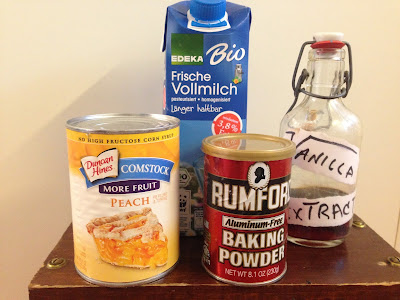 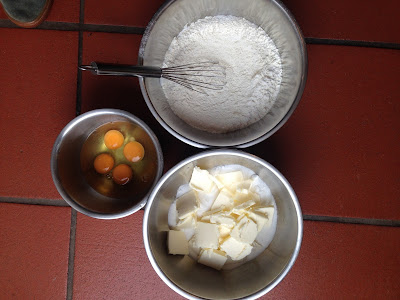 1.    Cream together the sugar and butter and set aside 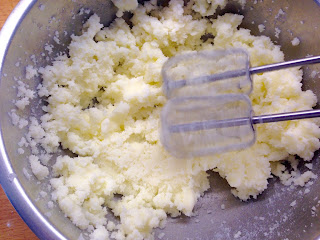 2.    Crack the eggs into a small bowl
3.    In a separate bowl, combine the flour and baking powder
4.    Alternately beat in an egg and some flour mixture into the creamed butter and sugar, until everything is combined.
5.    Add the milk and mix until the batter is smooth 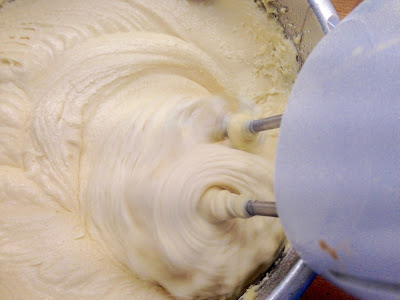 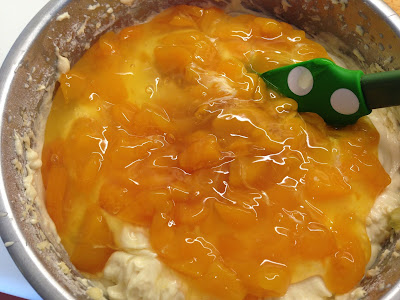 7.    Put the batter in the prepared baking dish and slide it in the oven. 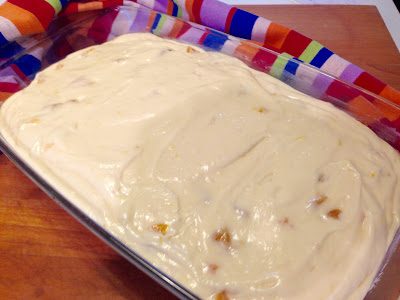 VERY IMPORTANT:  Let the cake cool completely before putting on the icing.

1.    Cream the sugar and butter. (Simple man that I am, I use an electric handheld mixer)
2.    Add the remaining ingredients and beat until the icing is smooth
3.    Spread the icing on the cooled cake and decorate (For the cherry cake version, I used cheery pie filling for the cake, but  maraschino cherries as decoration.)

Now it’s time to pop the cork on some bubbly, slice the masterpiece, and show your guests the real reason they’ll love your cake as much as they love trousers with an elastic waist! 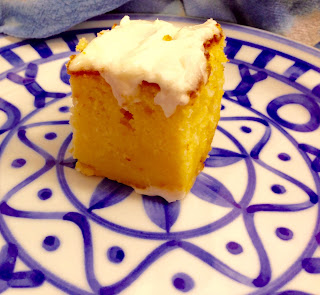 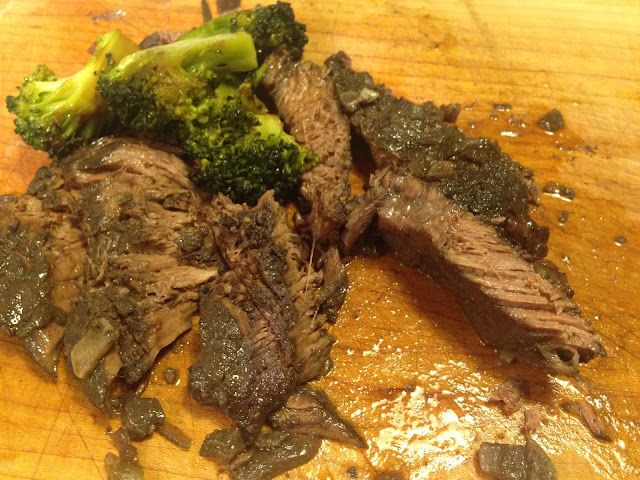 Then there’s the sumptuous meats, from Parma ham to another thousand varieties of cured meats and salamis.  Salami itself is another wonder world of flavors and none of them taste like the packaged, un-definable, nitrate saturated stuff labeled salami in most American supermarkets.

Today, I’ll take you past even the Italian meats you know and let you in on a new favorite of mine, Sirloin Italian Style.

This recipe isn’t original, but then few recipes are.  The basis came from a magazine, Tastes of Italia.  Nice magazine that’s mostly about Italians who immigrated to California a few generations ago, but haven’t forgotten how to cook.

Hard to call this a recipe, which is essentially steak and wine, with chopped this and that, all of it your choice.  But, that’s the essence of cooking, right?  Machines can easily be programmed to follow recipes.  How do you think canned goods and even bread can be shipped, or baked around the country, and always taste the same?

As a rule, I stay away from prepared foods, but I have to admit I don’t make my own donuts.

Check this simple example: Every time I squeeze fresh orange juice, there’s always a difference in flavor.  Maybe because I used different varieties, but most likely it’s because every orange is different, even if they all come from the same tree.  Then why do commercial orange juices always taste exactly the same? 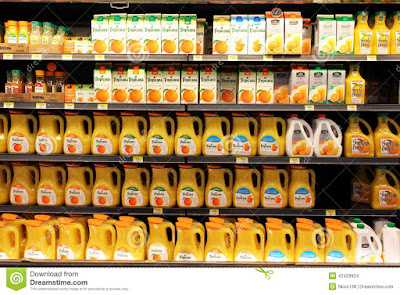 Commercial orange juice is a combination of thousands of oranges, often stored in huge vats for up to a year.  All the air is removed from the vats to prolong the life of the juice.  Lack of air also makes the juice tasteless, or so I’m told.  Companies then use specific flavor enhancers to re-flavor the juice and therefore it all tastes the same, every time.

Ok, let’s get back to Italian steak and wine.  This recipe, as simple as it is, needs some forethought.  Follow along and you’ll see why.  One of the things I love about this recipe is that with a little planning, I’m never working very long at any one time.

About 2 Pounds (1 kilo) of sirloin.  I used two good-sized steaks.
1 bottle of dry red wine
Diced vegetables of your choice.  I used half a thin sliced onion, four cloves of garlic chopped, two stalks of celery diced, and two good-sized sprigs of fresh rosemary.  Surely you have a rosemary bush growing in your garden or flowerbed.  No?  You heathen! 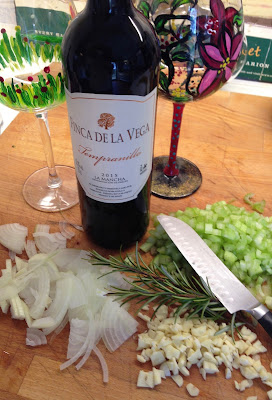 Some people say to chop the rosemary.  No need.  The leaves come off in the cooking and the stalks are easily removed before serving.

Salt and pepper the steaks.  Put them in a gallon sized, sealable bag.  Add the vegetables and the full bottle of wine.

Put the bag in the refrig and leave it overnight.  Turn the bag every now and then.

The next day, preheat your oven to 350ºF (180ºC)
Remove the steaks, brushing off the marinade, add a little olive oil to a large frying pan and quickly sear them on both sides.  Leave the steaks in the pan and pour in the bag of marinade.  Bring to a boil.  Cover and put the pan in the 350ºF (180ºC) oven for two hours.

I served mine with broccoli, steamed, then pan roasted.  Add Mirin (Japanese sweet cooking wine) and soy sauce as the broccoli is roasting.

Ok.  Time to refresh your hungry guests’ goblets and get down to some Sirloin Italian Style!

Just be prepared for at least one guest to remark:  “Jeez, I thought Italian meant pasta.”  Those folks clearly have no imagination.  Don’t invite them back and turn down all their invitations unless you want to dine on cans of Chef Boy-r-something, or Coast-to-Coast Pizza.

Why would you want to punish your taste buds like that, when I'm offering you Sirloin Steak Italian Style?