Holidays are times for favorites and that especially means food.   Gingerbread cookies, whose deliciousness floats through the house; Roasting turkey, cranberry sauce.  The list grows longer.  One of my special favorites, besides seeing my favorite elf, cozy by the fireside, with a naughty grin on her face…ah, lost my train of thought….oh, yeah, food.  Cornbread dressing!

Some call it stuffing, but I never stuff a turkey, so I call it dressing.  Dates back to my childhood, over half a century ago.  I picture my mother, who miraculously never weighted more than 105 pounds, in the uncomfortably warm kitchen, Vogue perfect, a starched apron completing the ensemble.  The oven going.  The stovetop, with half a dozen steaming pans, and on the counter a cast iron skillet loaded with day-old cornbread.  Why day-old instead of freshly baked?  Moisture, my lad.  Cornbread that’s a tad on the dry side soaks up the goodness of all that’s to follow.

It all starts with cornbread. Here’s my recipe, but feel free to use another.  The important things are to make it a day ahead and to make enough!  This is a single recipe that I use to make dressing that feeds 6-8.

Remove the pan from the oven, pour in the batter, and put the pan back in the pre-heated oven.  Bake for 20-25 minutes, or until a knife inserted in the middle comes out clean.

Once you have the cornbread, the rest is a cinch. 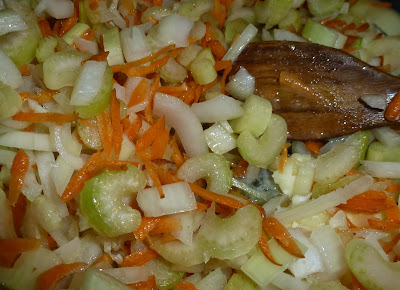 While the vegetables are cooking, in a saucepan, heat the chicken broth and reduce by half.

Crumble the cornbread into a large bowl.  Add the cooked vegetables and mix lightly, being careful not to pack down the mixture.  Moisten with the reduced chicken broth and toss.  Do not let the mixture get soggy. Taste and add more broth or melted butter if you wish.

Put the dressing mixture in an ovenproof dish and bake at 350ºF (180ºC) until the tops of the chunks of dressing begin to brown.

Already have the Turkey carved, the table set? Remove the dressing from the oven and serve with your favorite homemade turkey gravy.

Now that you’ve done your duty, crack open that bottle of bubbly and join your elf by the fireside.  Maybe the guests won’t notice.