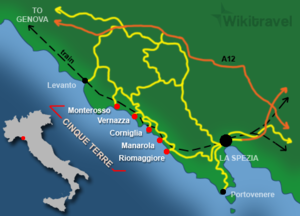 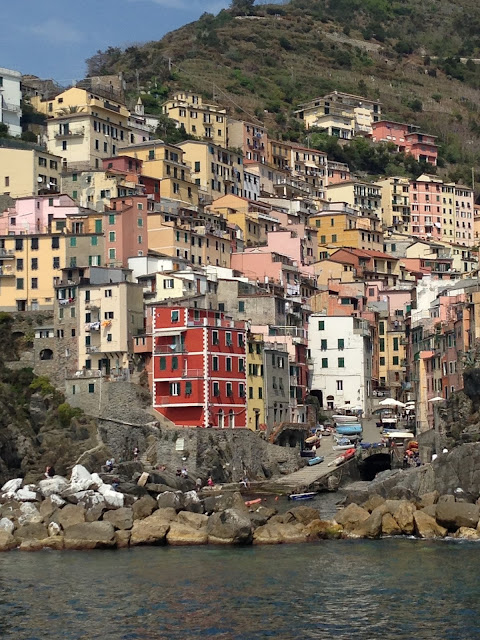 I’ve given you an overview of fabulous Cinque Terre. http://stroudallover.blogspot.de/2017/04/on-to-cinque-terre-part-i.html

AND told you about the delights of Ligurian cuisine. http://stroudallover.blogspot.de/2017/04/lunch-with-daniela-cinque-terre-part-ii.html

NOW, it’s time to spread our map, hop on a ferryboat and checkout the five villages and another one that doesn’t make up the Cinque Terre, but nevertheless is a jewel of a stop.

Getting around.  Lots of choices.  TAXI (expensive from town to town).  TRAIN (convenient and inexpensive BUT make sure you buy the right ticket or you’ll be fined up to $55 per person). WALKING (least expensive, but it’s a long walk!)  BOAT (my fave!  $25 for an all day, hop-on-hop-off trip in a spotlessly clean, first class ferryboat)

Lots of reasons taking the BOAT is my fave.  In addition to the excitement of glimpsing all of Cinque Terre from the water, is the supreme convenience of being able to look around, shop, eat, and climb back on board to do the same at the next village.  Boats run on a frequent schedule, so you seldom have to wait until you’re bored and stamping your feet in frustration.  Lastly, I like the ferryboat because it’s so inexpensive.  Convenient, beautiful. cheap!  The trifecta!

Lets talk briefly about the five, no wait, six towns!  Check out the map.  We’ll start from the largest and most northern town, Monterosso which is where we stayed.  Lots of shopping and lots of restaurants, but let’s not forget it’s also a vibrant, functioning town with small food stands, grocery stores, tiny shops, outdoor cafés, and a market square that really is a market place with fresh produce, cheeses, meats, flowers and so much more.  You’ll have to check with locals to find out the times and dates. 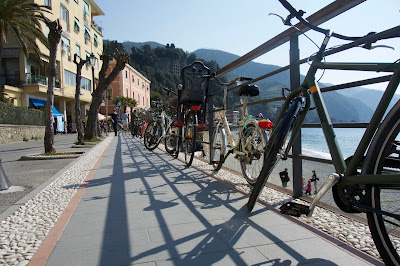 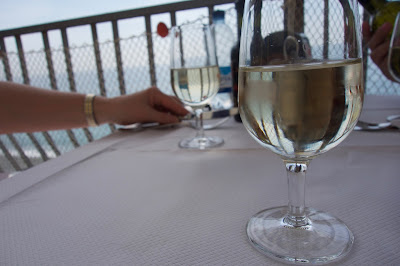 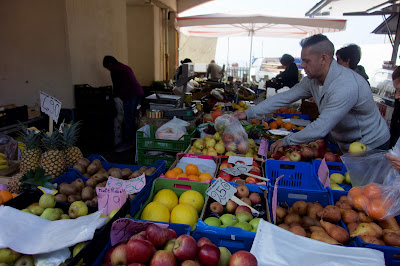 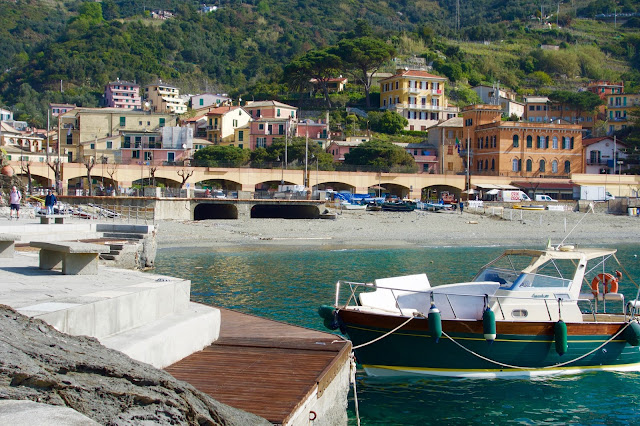 I love the back streets, where small, non-tourist shops offer local goods, such as dried herbs, wines, flavored salts, olives, cheeses, and cooking utensils the locals use.  Don’t you love to have friends over for dinner, or just wine and cheese and as they swoon over your lavishly laden serving bowls and platters, you hear:  Wow, those dishes are charming!  Where did you get them? 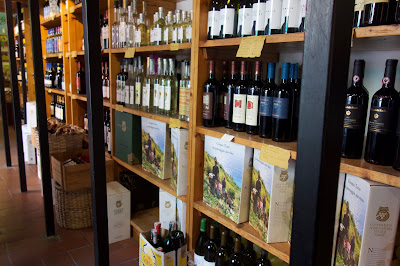 Then the snob in you comes bouncing out like a jolly joker:  Got those on our last trip to Cinque Terre.  It’s where I buy all my serving dishes…and you see these olive wood serving spoons?  Franco Bianchi made them for me in his small atelier in Monterosso.  He’s such a caro amico.

But, now it’s time to hop on the boat for a splendid cruise on the briny and a visit to the rest of Cinque Terre.  I’m not going to go into detail about each village, since they are all similar to what I’ve just described.  History, endless shopping, seaside dining on the freshest of local seafood, washed down by local wines.  Best of all are the friendliest people you’ll ever meet, not only the merchants, but the people on the street or sitting next to you in outdoor cafés, many of whom speak English and who are happy to engage in conversations and tell you about their town. 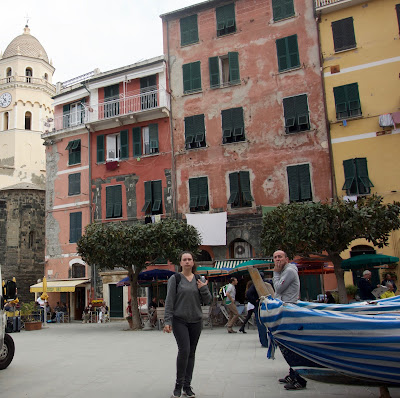 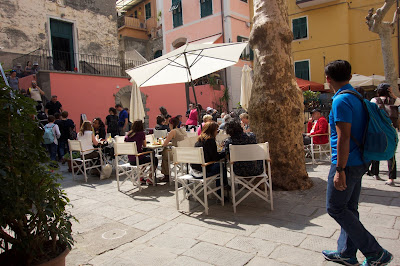 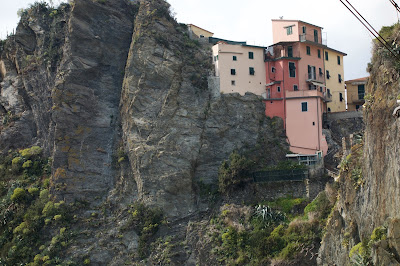 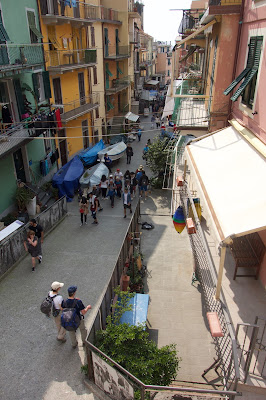 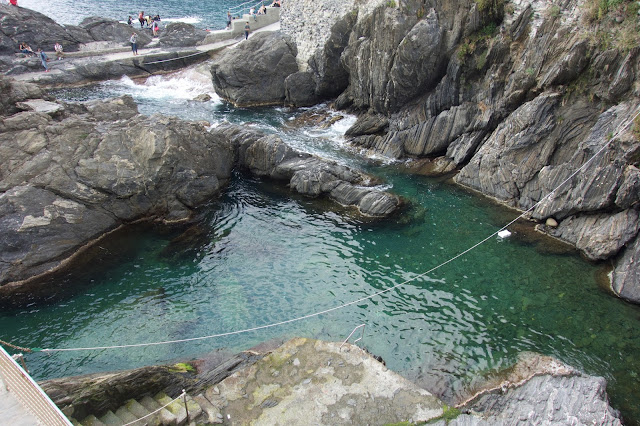 Only one town cannot be reached by ferry boat.  Corniglia is high on a bluff and sad to say, we did not visit.  Best to walk or go by train, or so I’m told.

Cinque Terre is not just for daylight adventures. If you’re up to it and plan ahead, there are also evening dinner cruises, but they fill up fast.  We wanted to take such a tour with Angelo, but when I called, he was solidly booked four days in advance.  We were there in April and I suspect in the high tourist season it’s even worse. 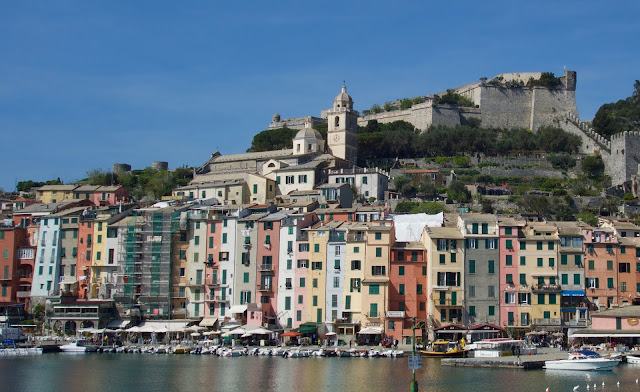 One town I promised to mention that is not included when the guidebooks talk about Cinque Terre, is Porto Venere.  It is also a World Heritage Site.  Yes, the ferryboat does stop here, or if you’re just passing through, you can also get there by car.  Coming in by ferryboat, the first thing you notice is the ancient church of St Peter (1198 AD) on the cliff approaching the harbor.  But the town dates back to the first century B.C.  And in fact, the ancient church was built on the site of an earlier Christian church, which was itself built over a Roman temple dedicated to the goddess Venus.  So many conquers, so many layers of history.  Roman, Byzantine, Genoese, French. Italian.  The harbor has seen more passing of empires and city-states than I can even begin to explain. 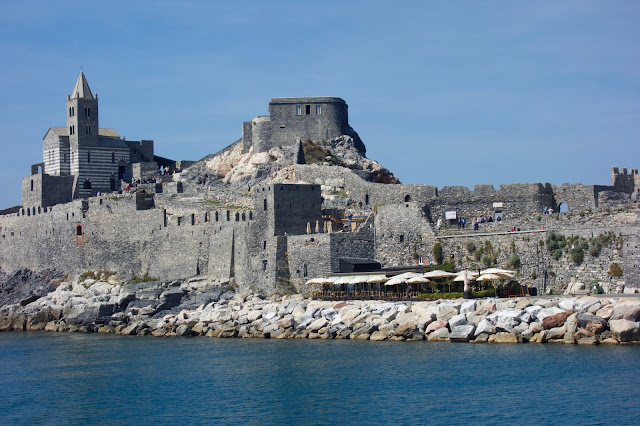 Ok, so what did I do besides wonder and wander in Porto Venere?  The next street, which parallels the promenade along the harbor front, is a tiny cobblestone alley, so narrow you can literally jump from a store or restaurant on one side to another shop on the opposite side!  My quest was to find an Italian linen shirt.  Sure I had found them in other shops in the other towns, but at ridiculous expense.  I was willing to pay more than I normally would, but not enough to keep me awake at night, mumbling “Oh, my god, what did I do?”

In this tiny alley, I found what I was looking for, a boutique for men, and the shop clerk was the perfect, dark haired Italian beauty.  As soon as I walked through the doorway, I knew I was going to buy a shirt.  Men are such simple fools. As it turned out, she was as charming as she was beautiful.  I tried on a shirt.   She put me in front of a large mirror and we both looked it over.  “It looks ok,” she said, but I could tell her heart wasn’t in it.  I dearly wanted her heart to be in it.

Then she searched and found a smaller size.  I stood in front of the mirror again.  Now she smiled. “Molto bene!”  I couldn’t have said it better myself.  I walked away with the perfect shirt at the perfect price, purchased from the perfect shop clerk.  Win-Win-And Dazzled.  That night I mumbled, “Oh, my god, where did my youth go?” 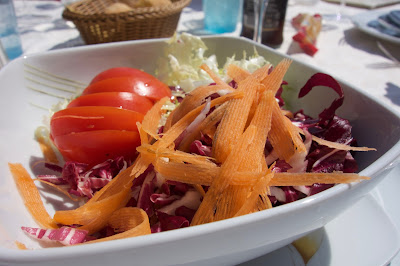 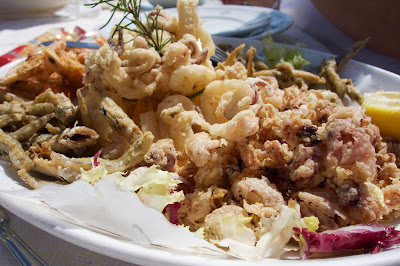 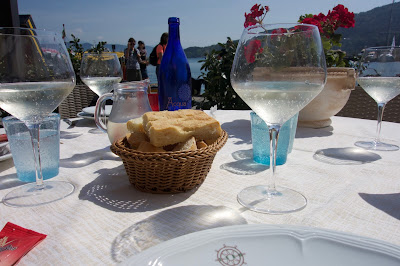 Lunch was on the harbor front.  Calamari.  Salad.  Delicious bread. Fried fish.  Winnnnnnne!  Should we order another bottle?  Was that a serious question? asks one of my lunch companions.

So we tarried at table, in the sunshine of a brilliant day, soaking in the atmosphere of an ancient port, while our Italian waiter brought us platters of sumptuous fare and kept our cups running over.

With great effort, we made our way back to the ferryboat, for a ride back to Monterosso and the promise of an adventurous evening.

Yes, I could live in Cinque Terre.  The question was, can I bear to leave?  Matter of fact, I think I could use another linen shirt… 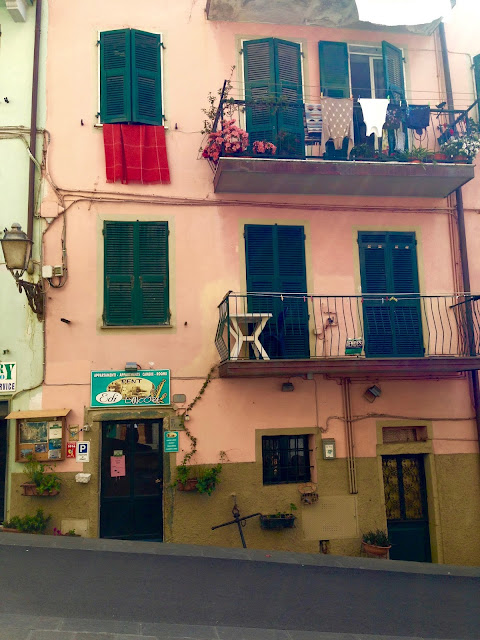 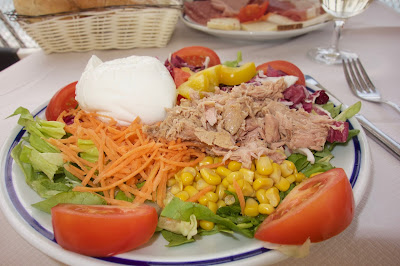 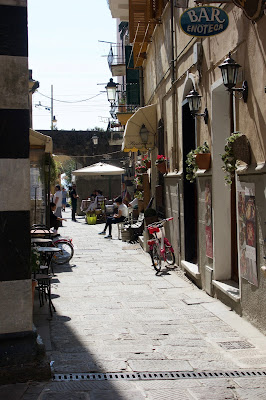 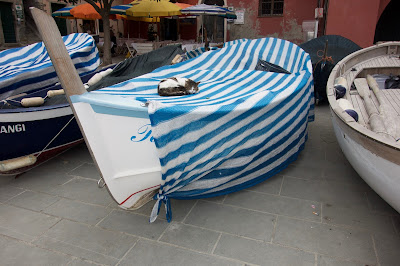 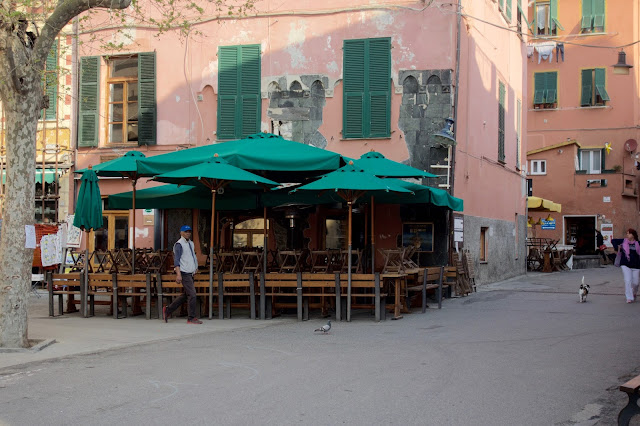